Speaking of not being a better blogger, I've got pics coming out of my ears that I just never have had the chance to post.  So, some pics from Callum's 1st birthday cake: 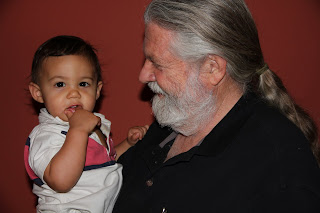 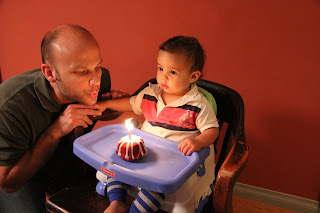 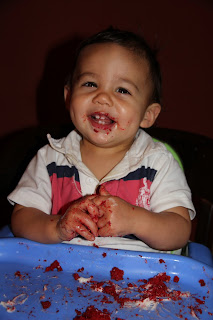 So - Callum turned 13 months old last week and about the most celebratory thing I can think of, which I did that day, was spend two hours at the dentist's getting my mouth drilled into.  It took so long (work on two cavities, an old one and a new one, back in my wisdom tooth, which is a hard place to reach), that the anesthetic actually wore off by the end.  Good thing I have a high tolerance for pain  ;-)

In any case, Callum is now 13 months old!  My baby is now a toddler!

He's a walking maniac - his balance is getting better and better every day, as he's trying out running here and there, to keep up with his big brother.  Whew!  I've also noticed he's been practicing his climbing skills more and more - not as much as Logan did at this age, but he's certainly interested in getting up to the higher places (like climbing up onto his brother's bed) which have an abundance of interesting things to get into.

Speaking of getting into - last month, I'd say he was all about opening every drawer he could find, dumping out its contents, and putting other things in them.  This last month, however, he's lost some of that interest in investigating drawers (unless it's the top ones which he can now reach).  Instead, he wants to open doors (which he can't do but he tries) or open gates (which he CAN do) or push buttons that light up and make the TV turn off.

He knows exactly what he's doing with that last one too - since he'll do a half turn and look back at us mischievously before he pushes the button.  I guess you could say he's in the "testing" phase?  It certainly tests our patience. 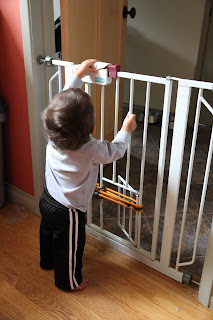 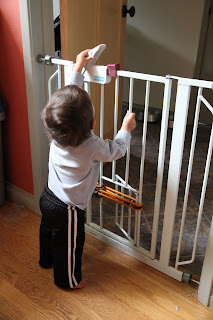 Speaking of patience, he's fond of sharing - he likes to feed me his cheerios and offer me his toys.  But, if you're not quick on the take, he'll start THROWING the toys, because apparently that's just as good as handing them to you.  In general, I think he likes the idea that he can start swinging his arm and letting go with whatever object is in his hand, and see how far the object travels and how loud Mommy will yell.  ;-)

He's still mostly just babbling with no real distinction in words, but every once in awhile he identifies with "dog" and points to Odin.  I've tested it by asking him where's the doggy?  And he'll point to Odin and repeat "dog" (it sounds more like "dah"), so that's been kind of fun.  I think he understands a lot more than we realize - but he hasn't picked up on vocalizing most of it yet.  Instead, he's become a master at pointing to whatever he wants (to touch, to see, to get closer to, or the direction he wants us to go).  So very much like his brother, he's a demanding little kid. 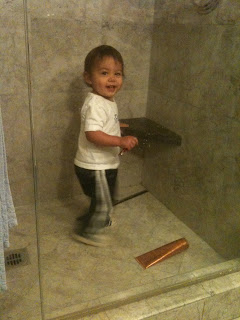 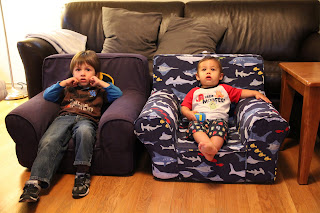 Speaking of demanding, Callum is a pro at finding his milk bottle at the last place we left it and bringing it to you (again, if you don't take his "offer" quick enough, he'll SLAM it on the floor at your feet with a message that rings loud and clear: MILK WOMAN!  DON'T YOU KNOW WHAT THIS MEANS?!?)  He's not into feeding himself as much as Logan was at this age and is really just so-so at using his sippy cup (he likes to chew on it more than drink from it - although as you've seen just a few days ago, he's starting to use his straw/sippy cup much more often).  I wonder if it's because I have less patience to allow him the freedom to feed himself?  Or is it because I'm too tired to think up inventive "big boy finger foods" for him to try when the jarred food is so much easier?  Or is it because he's the baby of the family and we treat him as such.... and he's learned life is so much easier when he's waited on hand and foot? 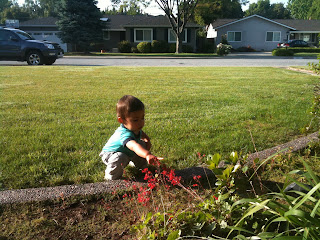 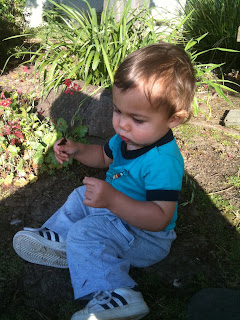 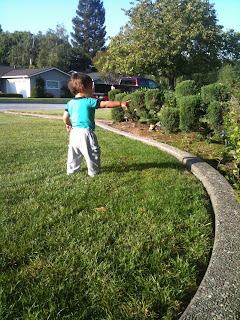 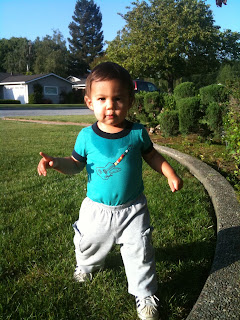 I suppose only time will tell.  Whatever the reason, we are enjoying our baby prince very much.  :) 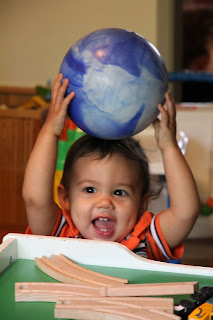 That picture of them both in their chairs looking like the most adorable couch potatoes ever is...well...adorable.