I can no longer claim to keep up my once, very regular blogger status, if I can't even blog about my youngest son's accomplishments each month. What a pathetic and weak turnout I've had for poor Callum this last year. :(

I had every intent to keep on with months 21 and 22, but by the time I was so behind that I was looking at month 23, I then actually made a conscious effort to not post. Because, then what the heck would I say for the big 2.0 the following month? ;-) 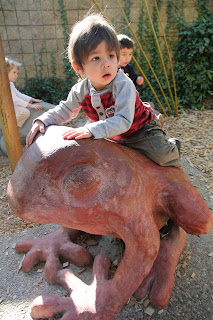 I can't possibly pretend to remember all the various milestones Callum surpassed over the past four months but I do remember a few of the most important. 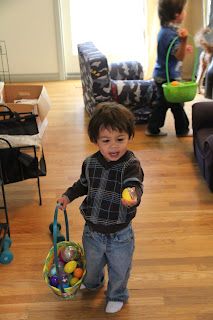 His language skills have really picked up - and his fun attitude really shines through at the same time. Callum has started to carry on more regular conversations with short complete sentences (some words are clear as day while others Jon and I still have to listen to very closely). He's certainly learned the meaning of "no" and "stop", which are sometimes cute and sometimes annoying. ;-) He's also prone to put his finger to his lips and say "shhhh" from time to time, which I can only imagine he gets from the teachers at school (since I usually bark at my kids "HUSH!" when I need them to pipe it down). He also LOVES to say "my turn", which I remember Logan doing at about the same age, but interestingly, Callum has to say it in a threatening gruff (but silly) voice, rather than a sweet inquiring voice. QUITE THE DIFFERENCE! 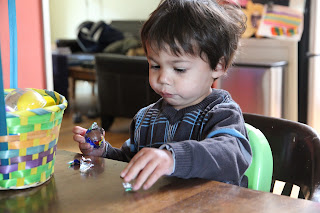 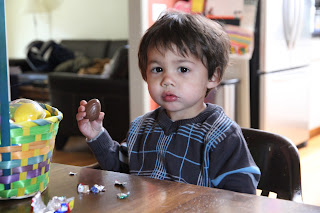 Callum has also really honed his physical skills too - he's quick to push (say, his older brother), if he doesn't get what he wants or something is in his way. He loves to jump - EVERYWHERE (to the point that I've been looking at various trampolines to set up in the house!). He's great at climbing up and down stairs no problem and is getting better with ladders, but still needs help (which can be tricky since his big brother sometimes sleeps on the top bunk, and we forget that the ladder is still out!) He's a super fast runner and climbs up and down furniture, couches, coffee tables (or dining tables - ack!), chairs, etc. with ease. All of this is great because it definitely shows how comfortable he's becoming in his own skin but what I enjoy the most, is how much he LOVES to tackle and rough house with his brother. Logan is in heaven that he can play more and more with Callum too. It's so fun to see.  :) 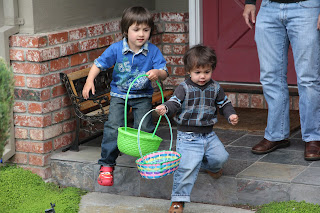 A couple other blog-worthy milestones that Callum has just started hitting are learning to use regular cups instead of sippy cups. We've been phasing the sippy cup out at the table during meals. It's definitely a tough process, since it means I need to keep an extra close eye on him and sit next to him rather than balance a few other chores while he eats, etc. but it's all worth it of course. 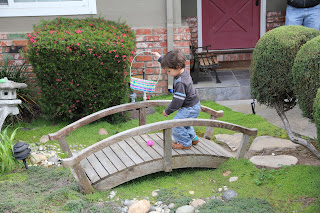 And finally, potty training! We are in the VERY FIRST stages, but it's exciting to start. A few months ago, Callum just barely started talking about "poo-poo" but not really doing much about it (and generally would let us know AFTER he went). Now he lets us know BEFORE (how much notice he gives us changes each day) when he has to go. For awhile, Jon and I thought he may just be saying it anytime he wanted to get picked up or wanted attention ;-) but now we can see he really means it and is letting us know. 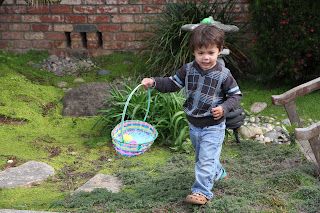 And, just within this last month, he has also started saying "potty" (interestingly, he'll also often say "my turn, potty" after Logan has sat on the potty). We've started responding to "potty", by asking him if he wants to sit on the potty - it's 50/50 on whether he'll answer yes or no. And, save for two miraculous events which were pure accident I'm sure, he doesn't actually do anything when he is on the potty but smile, laugh, swing his legs, repeat peepee and poopoo, then stand up telling us he's "all done" and "bye bye poopoo" (when there's nothing actually in there). 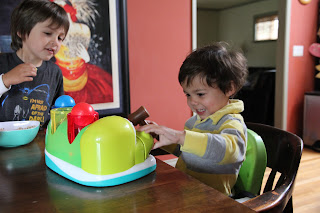 Finally, I'll throw in one last note that while most of the time Callum is super smiley and happy as can be, that happiness flips on a quick kill switch, where we often find him throwing mini-tantrums whenever he doesn't get his way or is overly tired or just doesn't like the way something is going. 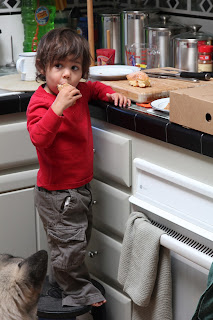 And if he really wants to be dramatic about it, he'll fling his body on the floor, face down, sobbing uncontrollably. When this happens, I generally just step right over him and keep walking down the hall to my room, or wherever it is I'm going (which is harder to do when I want to leave the school to go home, but can't very well just leave my kid on the floor crying, can I?) I just laugh and shake my head - because if it weren't clear already, that type of behavior certainly solidifies it - we have a 2 year old running around our house. 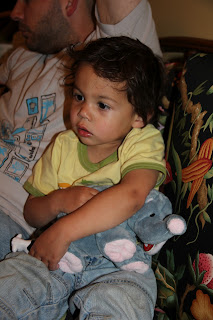 We love you dearly Mr. Callum. Your devious and mischievous smiles, all of your impatience, and the constant twinkle in your eye. We love it all.