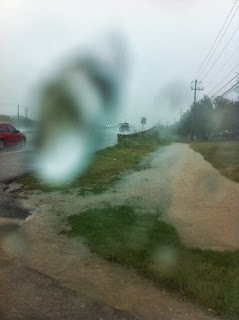 I've been in Austin since Monday for work. Before I left, a colleague
(in Austin) mentioned that they were expecting rain this week. I
hadn't even thought to check the weather and was already at the
office, with no car, a packed suitcase, and a couple of hours until my
flight was to take off. So, I shot an email to my team to see if
anyone happened to have a spare umbrella with them at their desk that
I could borrow for the week.

As luck would have it, TWO of my coworkers had one for me to borrow. I
took both, figuring someone else traveling with me may also need one.

After our meetings today, we walked outside (for the first time since
morning) to find it absolutely dumping buckets. Guess whose two spare
umbrellas came in handy?!?

I took texted this pic to my two coworkers back in CA, thanking them
for the umbrellas, since I figured they'd get a kick out of it (which
they did). :)
Posted by Mama Bree at 10:52 PM