Since I'm still awake and it's a holiday (no work tomorrow, yay!!), I guess I'll post up pics now before I forget!  :)

We lazed around most of the day indoors since it was so hot - but mid-day Logan and I went out on a hunt for some small little flags that he, Callum and their friends Robert and Connor (who we would be seeing later) could play with.  We also got a larger one, with a mounting bracket, to post up on the house (both boys have really enjoyed seeing all the flags everywhere so why not?!)

As Logan proclaimed: Now, everyone will know we love America!  :)

After Callum woke up from his nap, we headed over to the Jodoins' house to take advantage of their refreshing cool pool.  We played for a couple of hours before deciding it was time to rinse off, get dressed, and head on out to see fireworks.

Jenn and I had researched a number of different shows in the area and finally decided to check out the City of Santa Clara's show.  We thought, it wouldn't be as big of an ordeal as Great America (a local amusement park) or Shoreline Amphitheater (where the tickets were super expensive and the traffic would suck), but it also would be more of an event that we all could enjoy, with live music and food trucks, vs. camping out on a deserted mall parking lot.

That's foreshadowing for those of you who didn't catch it.

As we're nearing the street we need to turn on, I notice A LOT more cars turning in our same direction and a WHOLE lotta people walking with their folding chairs and flags and coolers.  This was still a number of blocks away but it was definitely a sign of what was to come.

I didn't take any pics but there were throngs upon throngs of people everywhere we turned.  When we finally got to the park where the event was being held, it was VERY clear to us we wouldn't be able to find a decent place to camp out and let the boys run around, let alone parking nearby!

I could also tell that Jon's blood pressure was quickly rising - since he was already less enthusiastic than most folks, about attending a 4th of July event.  Still, he knew I was hell bent on having the boys see fireworks this year, so he suggested we drive to the mall, not too far away, and find a spot on the upper deck to see the show from.  I was worried it would be too far away to get a good view (and we didn't really know how high up they'd shoot the fireworks anyway) but I also could tell this wasn't going to work for us.

So, I called the Jodoins who were somewhere behind us in the crazy traffic and we made a quick detour to our adventure, heading over to the mall instead.

And it was absolutely dead!  Not a single car was up there!  (I had told Jon it would probably be just as packed over there too). 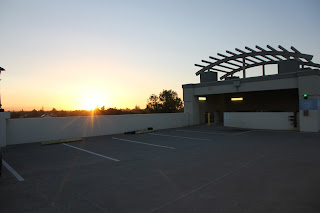 So, we set up our chairs and sent the Dads off to find food, while Jenn and I let the boys run out some excess energy around the lot.  :) 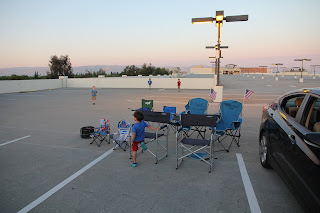 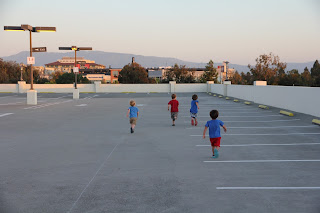 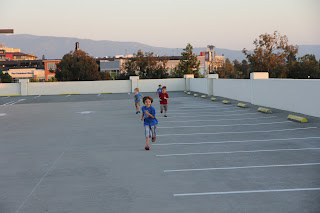 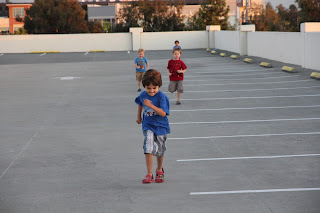 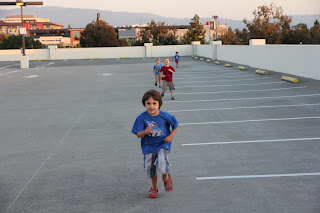 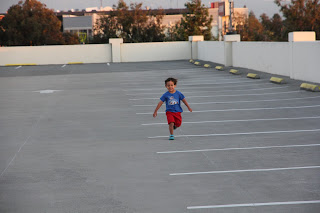 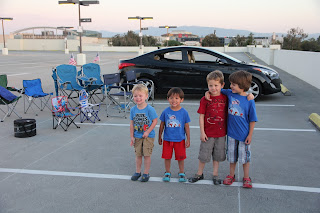 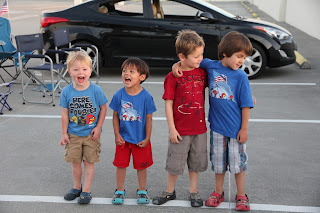 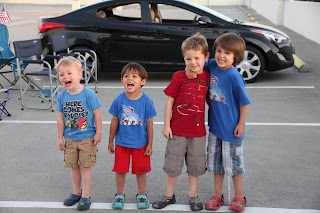 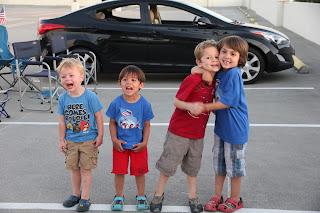 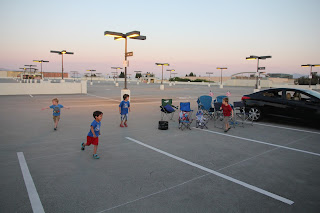 A few other cars and trucks started to show up a little later in the evening, roughly 8:30-8:45pm (we got there about 8pm), but it was nowhere near packed with people like anywhere else - and ended up being a really smart choice since we had a clean and easy getaway home after the shows were done.  :) 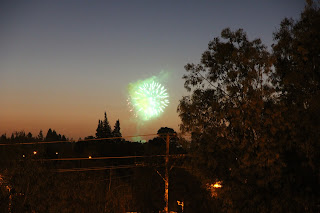 The boys all had a blast hanging out and running around, having a "picnic" dinner and watching the many various fireworks shows around the Bay Area, which we could catch from our vantage point.  The boys were chatty all the way home but didn't put up much of a fuss when we put them to bed - I'm sure the sun, swim and laps across the parking lot all helped.  ;-)

All in all, it was another fabulous 4th of July!!  Hope everyone had just as much fun!
Posted by Mama Bree at 12:33 AM