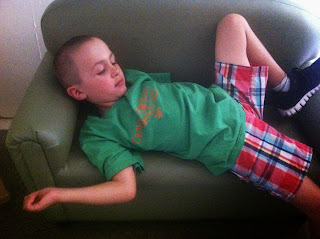 You can't really tell because Logan wouldn't let me take a good pic,
but he's wearing his summer camp shirt here - since today was his
first day at summer camp!

The school let us move Logan up early (usually they don't take kids
until the summer after Kindergarten) - and Logan has been asking if he
can move to the big kid class across the hall, so we decided to set
his first day today.

I think I was just excited as he was, because I fondly remember the
good ol' days as a kid, going on all sorts of field trips over the
summer. Today, they went to Gilroy Gardens, an amusement park for kids
about 5-6 yrs old. Of course, he had a blast. ;-)
Posted by Mama Bree at 9:21 PM