Last Sunday afternoon, while I was wrestling a squirming whiny 5 1/2 year old in a Target dressing room, Jon and I both got a text from Nathan.

Found a stray kitten.  I usually give them to you when I find them.  Interested?

And then he attached this pic.


Jon said it was up to me to decide whether we'd rescue it.  I have a hard time saying no to little adorable guys like this, but I couldn't make a split decision like this, in the middle of a store, with a nagging kid by my side, just after we had put Izzy down.  :(

I wasn't sure if I was ready to take in another cat just now - especially with a number of trips we have coming up where one, or both of us, would be out of town.

Add to all of this was Nathan's own situation.  He was, himself, heading out of town just that very day - to begin making arrangements for his father's services, who had just passed away the night before.  :(

So, because of my indecisiveness and not wanting Nathan to have to turn back around and head down to us to drop off an abandoned kitten, I decided to say no thank you.

I was torn on whether that was the right thing to do - and prayed that the little guy would be adopted very quickly, given his kitten cuteness, from the shelter that Nathan was going to drop him off at.

Roughly an hour later, I saw posts on Facebook from Nathan, documenting his afternoon distraction. Nathan had found this little guy in Fremont - but the nearby animal shelter was closed, so he went to the next closest one on his way out of town, that was open, in Dublin.  When he arrived at the Dublin animal shelter, he and Kim mentioned they found the kitten in Fremont, and that's where they stopped him right there and said sorry - we can't take him.  You need to leave him with a shelter in the city you've found him in.

But what if we SAID we found him in Dublin?

Sooooo, back to Fremont Nathan and Kim went, which Nathan posted about.  Apparently, though the shelter was closed on Sunday, it has a "night drop box" for these occasions, where you can leave the animal in a cage (I guess?) with food, water, etc.  But, when I read that, it just made me feel terribly bad - the idea of leaving the poor guy in a cage overnight like that, didn't sound right.

So, we called Nathan up - we weren't sure if we really wanted the kitten, but we'd keep him at our place as a foster and then decide whether to take him to a shelter when one opened up, or find a friend who wanted a cat, etc.  Poor Nathan and Kim drove back down to our place to drop the little guy off (I felt really bad about the delays this caused but I guess the distraction helped Nathan a bit for the day)....

Meanwhile, Jon ran out to the local pet store and picked up some kitten food, litter and a small cat tower, and set up a really nice little spot for him to hang out and adjust to our chaotic household, in our master bathroom.

The first day/night was rough - the poor little guy was scared and pissed and super freaked.  He basically hid behind our toilet the entire time and hissed and swiped at us anytime we got near him.  And then that night, he cried and meowed all night long (which kept us up as if we had a baby in the house again!  *yawn*) 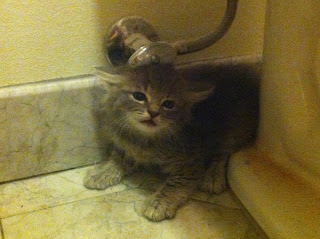 Monday morning (before I got the dreaded lice call that blew out my entire day), I sneaked him into an open slot with the vet to get him checked out.  We had already given him a flea treatment the night before but otherwise, wanted to make sure we took care of anything else we needed to like vaccines, etc.


They confirmed he was a boy.  (Man, I feel like I can NOT get away from males!) 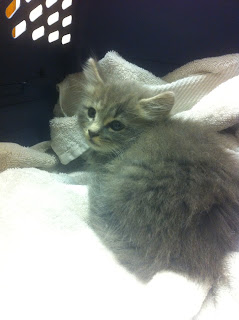 The little guy weighed in at a whopping 1 lb, 3.5 oz (he fits in the palm of your hand), which meant he was either quite a bit underweight, or probably very young.  The vet estimated he was probably 4-5 weeks old, 6 wks at the *most* (if he was underweight). This meant he was actually too young for his vaccines, so we gave him some deworming meds and made another appt for 2 wks from now.  I was also given some wet food and a syringe - with instructions to hand feed him from a syringe for awhile, until he was big enough to eat on his own.

So, I let him chill in the bathroom most of the rest of that day since, as you recall, that day was turned upside down with lice decontamination activities.

I would check in on him every now and then, to take a break from my cleaning, but otherwise let him be. I did figure out how to feed him and gave him quite a bit of food that night - amazingly, he kept quiet that night, so I suspect he was either missing his mommy, or hungry, or both, the night before.  ;-) 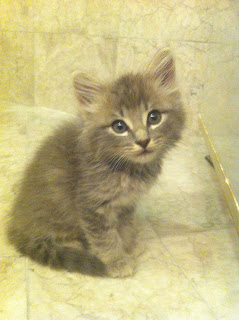 Each day, we've worked on socializing him a bit more.  At first, he'd continue to hiss when we'd get near, but stopped swatting or putting up a fight if I just picked him up and pet him.  I actually went home early on Tuesday so I spent some more time just hanging out with him that afternoon and evening (feeding him, which he loved, and petting him, etc.).  By the end of the night, he was still skittish, but more curious and started crawling around on me - finding his favorite spot to hang out was on one of my shoulders. 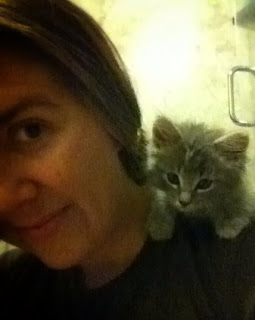 By Wednesday, I was allowing the boys to spend more time hanging out with him too.  They were VERY curious about the kitten, but as you can imagine, those first few days he was so freaked that these loud, poking, jabbing and fast moving little monsters were too much for him.  But by Wednesday night, as he got more used to Jon and I handling him, he allowed the boys to handle him too.

Callum was still way too much - and I only let Callum hold him long enough to take this pic because, as you can see, he's about to pop the poor kitten's eyeballs out with sheer excitement!! 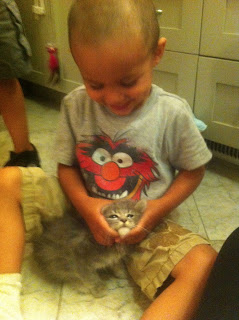 But Logan was another story!

Logan was fantastic.  He understood that we need to be gentle and quiet and calm with the kitten.  And, because his lap is smaller than mine, the kitten (I think) found that it was the perfect size to snuggle into. The kitten would have likely stayed in this spot all night but Logan finally got bored and tired of sitting on our bathroom floor and asked me to take him back.  ;-)   Logan did, later that night, ask if the kitten could sleep with him in his bed though - and several times over the past week, has asked if we can keep him.... 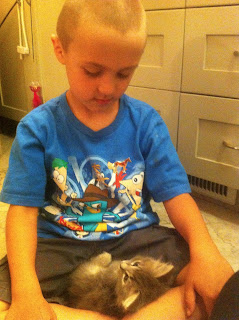 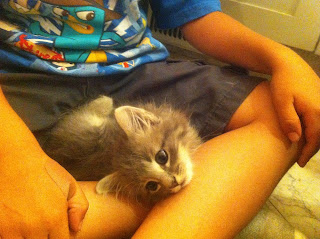 Over those last few days, we were opening up the bathroom door to our room and letting the kitten explore our room too, once we were sure he knew how to use the litter box.  ;-)   But we were still keeping the dogs out since they were just way too overwhelming for the little guy.  By Thursday night, we introduced one dog at a time into our room to let the two sniff each other - but we locked the dogs out of our room that night (which they hated) and instead let the little kitten sleep between Jon and I (which he loved). 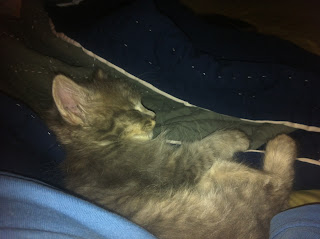 Yesterday seemed like another big day in development - since I noticed he began playing with all the little kitten toys (which the boys and I got him sometime mid-week).  He was less shy and more brave about running around the two rooms, up and down his little tower, onto our bed and no more hissing as I'd reach for him to pick him up.  He'd hang out on my lap with his arms and legs splayed out all relaxed and purring like crazy.  And, biting and swatting (but playful, not pissy) at my hands or feet or arms, etc. 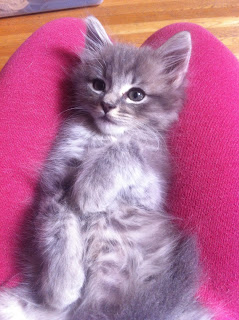 Now THIS is the kitten stage I'm familiar with!!  It's pretty fun to watch him play - and it reminds me a lot of when I had Zoe and Iz as kittens those first few weeks as they were growing.  :)

(btw, small kittens at play, in low light settings, are VERY hard to capture - please look past some of the blurriness here!) 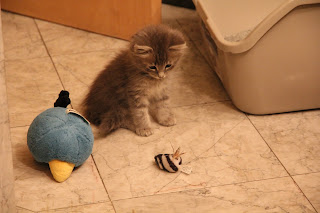 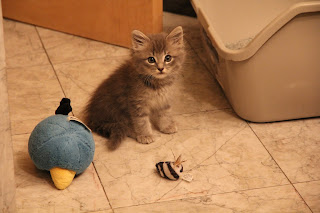 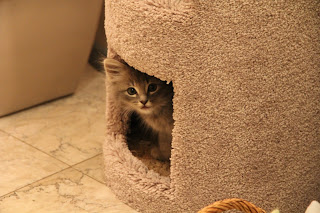 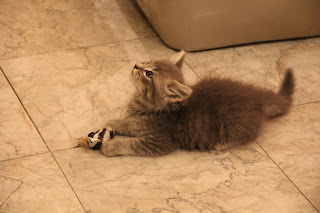 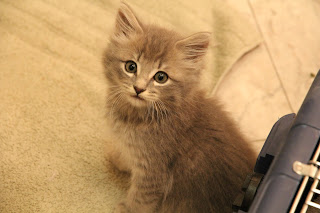 Logan and Callum are totally smitten with the little guy.  They call his little cat tower a "castle" and have literally armed it with several of their stuffed animals ("knights") to protect him and play with him. They've been very excited to hold and pet him and ask about him every day when I pick them up from school.  It's actually quite fun to see how they interact with the little guy and learn about him too.

I don't think we've officially decided to keep him - but Jon has decided to name him.

I thought it would be funny to name him Greyballs (my Aunt had a grey cat when I was a kid, named Greyballs, and that was the first thing I thought of when I saw him), but that name was vetoed.

I was also vetoed when I suggested Earl Grey or Steel Wool. 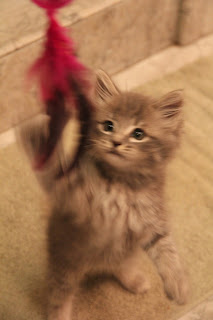 Logan wants to call him Sweetheart, Sweetie Pie, or Piggy (aka Angry Birds).  Because, "I like him so much!" 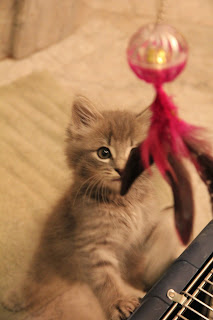 But Jon wants to call him Gandalf (the Grey).

I'm guessing Gandalf will win unless someone suggests another name that we all like.... 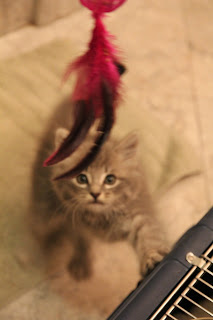 Cute story and pics, you guys are a bunch of softies! ;-)

You can have one of our cat's names, though it's more appropriate for a female: Macy Grey.

(By the way, that was bruce not arlo, but I guess because we set up a blogger account for Arlo a long time ago that he never used, that's tied to my google email now when I reply on a blogger.com post)

LOL - thanks for clarifying Bruce, I was surprised to see a post from Arlo! ;-)

Yes, had he been a girl, I would have named him Macy in a heartbeat. I've been saving that name to name my next female pet for YEARS! But, alas, I keep getting stuck with males ;-) So, still going to save the name for the right one!! (I remember when Shawn announced your Macy's name and I told her hey!! I love that name and want to name one of mine the same someday too!!) It's a good one for sure :)

Adorable! Although we are dog people, we would find it hard to resist falling in love with such a kitten. Except we are both allergic! You are such great fosters.