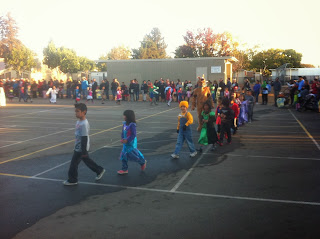 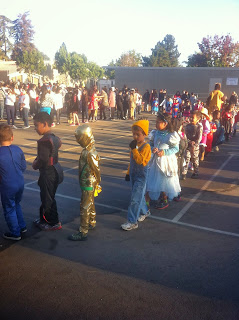 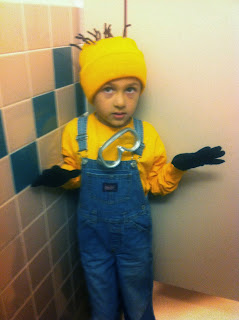 I remember Halloween parades during elementary school being a big
thing. I remember enjoying them when I was young, and remember being
embarrassed some years later (as I got older I think). So I was
curious if Logan would have a good time or if his shy sensitive side
would kick in.

Thankfully, as his group rounded the bend, he was smiling and waved
real big when he saw me. :)

Then, after some announcements and celebrations, they took the kids
around one more time before heading back in. The second time around he
had a very sad forlorn look on his face (2nd pic) and would hardly
look at me. I saw the teacher had noticed this too and tried talking
to him but I could tell he wasn't talking.

So, since I needed to head in with them anyway, to get him changed
back into regular clothes, I found him and walked along side him,
asking what was wrong (and thinking the worst, like some kid had
pushed him around or made fun of his costume or something of that
sort).

I couldn't have been farther off base. He was upset, he explained,
because the parade had ended and he wanted it to continue!!

The last pic was a final shot I grabbed in the bathroom... He asked me
to take the pic before we changed him back into his school clothes. :)

All in all, pretty cute and fun for all. Next time I'll remember to
bring my camera! ;-)
Posted by Mama Bree at 9:22 AM