We had a jam packed weekend but I was insistent that we make it to the Uesugi Farm Pumpkin Patch today, since going the next two weekends will likely be even busier and more hectic and I knew we wouldn't want to deal with that.

We've never been to this particular patch but I had heard great things and wanted to try it out.  Plus, Jon has pretty much sworn off of ever going to the pumpkin patches in Half Moon Bay ever again (that's where we've gone in years past) because the traffic is such a nightmare. :(  This place is ~30 min south of us, so it's still a drive, but TOTALLY more do-able and more bear-able!  I think it may be our go-to place moving forward!

So, I've pretty much given up on catching up the blog with my - literally - thousands of photos I take throughout the year of the boys.  Downloading from a trip, going through all of the pics I've taken to find a few star ones to show off, and then writing about it and uploading it all, is pretty much never going to happen unless I take 2 weeks off work just to blog.  ;-)  So, while I'd love to catch you up on our recent Hawaii trip or hell, a weekend outing to the tidepools, that will take awhile.

These however, were fun for me to flip through and I was able to pull out a few quickly enough that I figured I'd slam together a quick post.  ;-)

There were gorgeous marigolds (and bees) everywhere!  :) 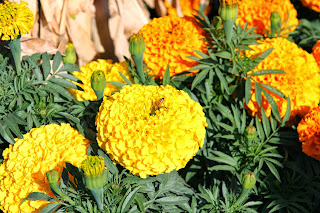 While we waited for Jon who stood in line to grab some kettle corn, the boys and I watched the trains and made our plan for the day... 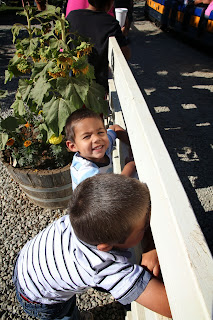 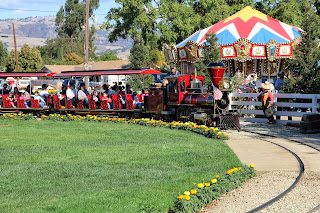 Up first - the Corn Maze!!  This was Logan's pick (he LOVES mazes).  I picked the harder one even though it cost an arm and a leg because I thought oh what the heck.  We spent a good 45 minutes I would guess and it was fun!  They had a questionnaire that they gave ahead of time and you'd have to guess the correct answer at each marker (there were 10) to get to the next one (quickly, anyway, I think you could have still figured out how to get to the next marker if you paid attention).  ;-)  The boys had loads of fun and it was a lot better organized than past mazes we've done! 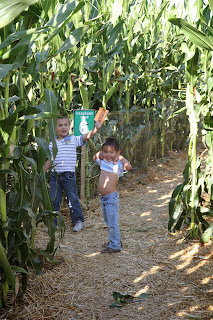 Next up - the Train Ride!!  This was Callum's pick (of course). And he was thrilled.  :)  A very fun 5 minute ride around the pumpkin patch, with a lot of "farm" displays up for the kids to see too. 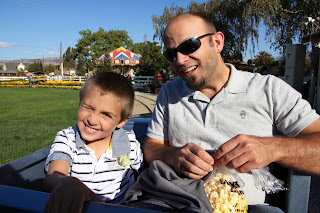 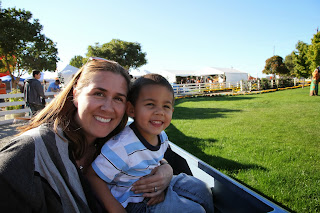 And then finally, the pumpkin patch itself!  (Mom's pick!)  I loved the variety of pumpkins, shapes, sizes and colors, on display.  I could have spent an hour just wandering around but Jon and the boys were wearing down.  :) 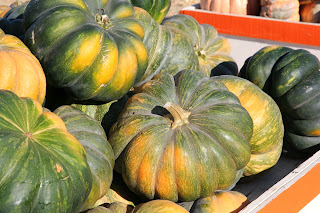 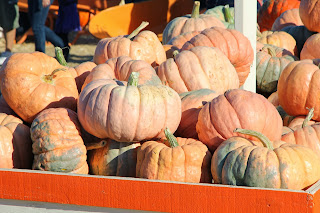 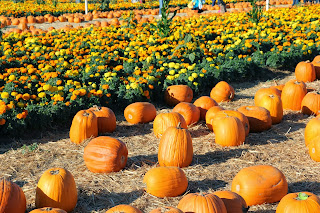 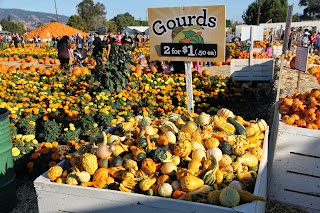 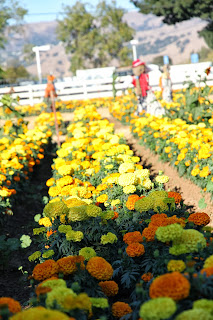 We found an old scale, I think more for display than actually weighing pumpkins, and put each of the boys on to see how much they weighed.  Logan's is a little blurry because we were laughing too hard at his sad pitiful face.  ;-) 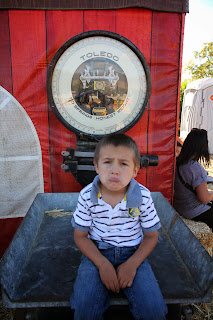 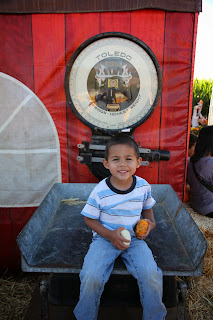 This next series of pics I really enjoy - I'm that crazy mom trying to do everything to coax her kids to stand straight, not wiggle or move, in front of the ginormous pumpkins behind them, so I can take a quick shot of the two of them together.

But what do they do? 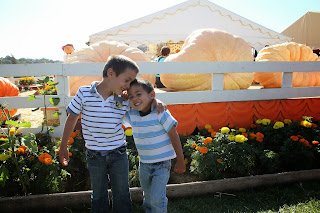 I'm able to grab one VERY quick smile even though Logan is squinting... 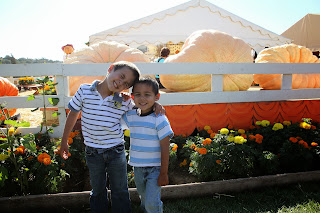 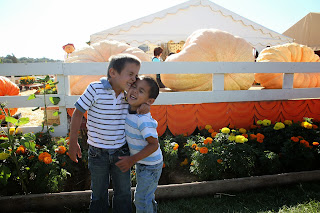 And slowly moves into, what I like to call, "smoosh your little brother's face to death"... 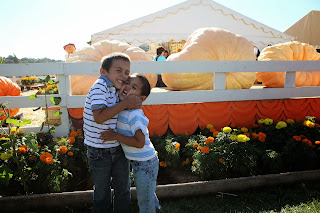 While the younger one sticks out his tongue to lick him.  *sigh* 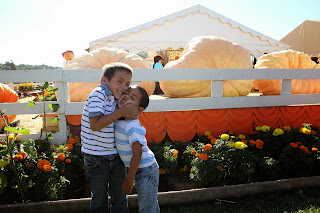 The required photo in the ACTUAL pumpkin patch! 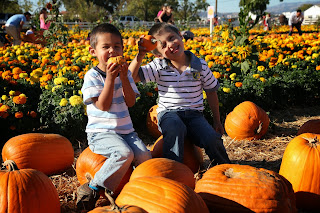 We actually got a decent shot with me and the boys! 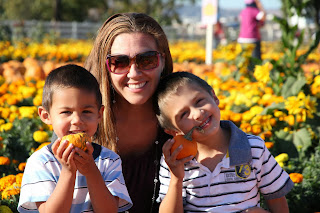 And one of Jon and the boys! 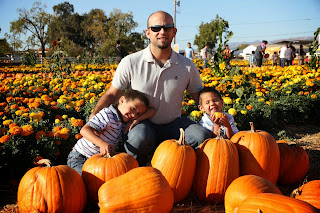 Perhaps next year we'll get one with all four of us together?