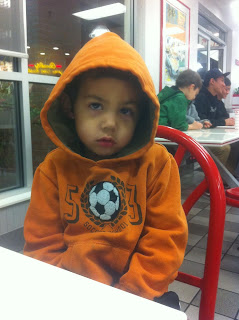 Look how pathetic and sickly this poor guy looks! :(

We just barely made it out of the house with light left! *sigh* But,
we are finally on the road.

We took the route up thru the city because Jon needed to pick up a
delivery at his office. This actually turned out to be a good stop
because Callum desperately needed to pee - and ended up also having
diarrhea. :(

He was doing great all morning but I guess his fever set in again. So
of course it got worse as we hit the road after the city. And, he was
trying to nap but having trouble because he kept coughing, then
gagging, on his phlegm. :(

We were stuck in bumper to bumper (around Vallejo) so I decided to do
the total Mom move and unbuckle, turn around with butt in air, and dig
underneath our mountain of crap to find the bag of cough medicine for
the little guy. I was hoping the decongestant might help.

Unfortunately, he gagged on the medicine (he often does when he's this
sick), and threw up. Mostly on me/my hand as I tried to "catch" it all
- while I'm directing Jon to send back the wipes that were at my feet,
and calming Callum down. Meanwhile Jon is trying his best to fight the
traffic and pull over.

So we finally got off an exit and got out. Figured it was time for a
dinner stop anyway. I had managed to clean Callum up on the freeway so
the damage wasn't too bad, but when Jon opened the back of the truck
to let the dogs out, one of them had thrown up and were all crowded to
one corner avoiding it. ;-)

All I have to say is, thank goodness for baby wipes! We still use them daily.
Posted by Mama Bree at 6:03 PM