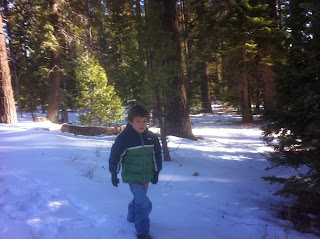 We took the dogs and kids on a 1.5 mile walk into town. Nothing for
Jon and I of course but MAN the boys made that walk 30 min longer than
it needed to be. ;-)

Callum kept us up all night. He was coughing and gagging nonstop.
Because his nose was so stuffed, he was basically breathing through
his mouth all night which I think is what irritated his throat/cough
more. :( Plus the super dry air here and heat running all night I'm
sure doesn't help. Jon picked up a cheap portable humidifier at the
drugstore today so we're hoping that'll help him tonight.

Logan has been complaining of his own issues. All of his molars (the
next/adult set) are coming in and causing him quite a bit of pain and
bleeding a fair amount. He's complaining of his stomach hurting which
we are guessing is due to the blood he's swallowing. He doesn't seem
sick otherwise. And, finally, we think he's dealing with growing pains
because he's been complaining of his legs (all up and down his thigh
and calf) hurting him. Even when just laying down in bed. I was lucky
enough to hear all about it during the walk today too. ;-)

I was really hoping we could hit the slopes today and take the kids
out but after last night and how worn out everyone is today, that
won't be possible. So, we're just trying to make the best of it! I
guess that also means we have to come back soon to get our time in on
the slopes after all. ;-)
Posted by Mama Bree at 1:46 PM