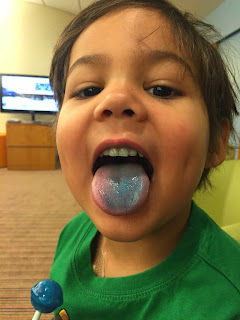 Look at this goofball!!

We returned to the clinic (EARLY) this morning to check on Callum's counts. We've been off chemo since his admission ~12 days ago, since we have to stop chemo when he's neutropenic, so we want to get him back onto therapy again as soon as we can.

Unfortunately, his ANC is still too low. In fact it dropped again, back down to 30 today. :( Our team isn't concerned as long as he doesn't have a fever (which he doesn't). The way they see it, he's been fighting three different infections, which gives three different reasons to be neutropenic.

We'll return Friday to check counts again. None of us feel like he'll recover by then but *just in case* he does, this allows us the weekend to return back to chemo (basically, the sooner the better).
Posted by Mama Bree at 1:13 PM