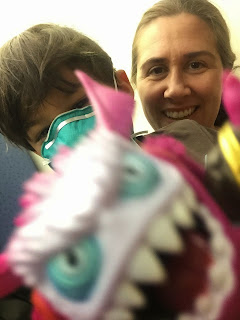 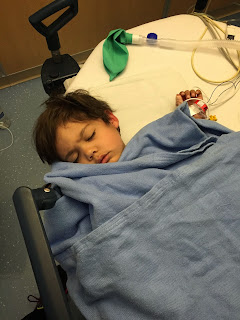 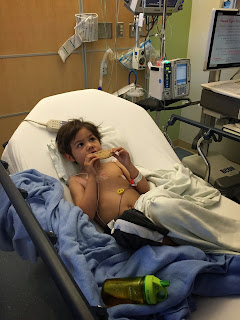 Today was another scheduled LP - so I thought I'd share a few pics of our day.

The first is a snapshot I grabbed while Callum was still somewhat agreeable, before he got super grumpy from being hungry, thirsty and tired (he hadn't eaten since last night and the clinic was behind by 2 hours!). He wanted to include his favorite Skylanders character, Love Potion Pop Fizz, in the picture, so that is what the monster head is in the foreground. ;-)

The second pic is of Mr. Callum, still snoozing after his LP procedure was complete. The procedure went just fine and all was good.

While we were waiting for him to wake up from the anesthesia, the doctors came in to examine his ingrown toenails again. He's been on a round of antibiotics for the last 10 days and his toes haven't healed completely yet. His nurse wasn't super concerned because he seemed to be doing so well, however his blood counts came back while he was in the procedure and showed that he was neutropenic.

Given we now know he's neutropenic, that changed their opinion of his toenails. Because they haven't cleared after 10 days of antibiotics, the doctor decided to order antibiotics via IV to more heavily treat the infection. And sadly, that means we're being admitted.

So, the third pic is of Callum hanging out, now awake and watching movies and chowing down on food while we wait to be assigned a room (which we have just now moved into since I've been composing this post over the course of the day!).
Posted by Mama Bree at 3:33 PM