Looking for the silver lining 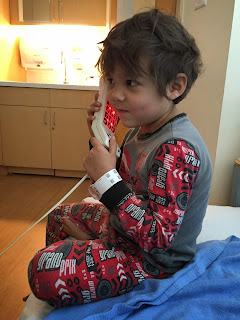 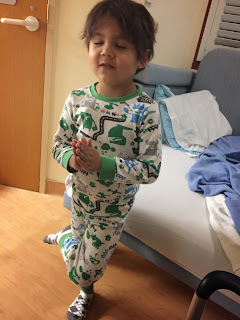 Thought I'd share a couple snapshots from today. The first is Callum ordering his cheeseburger at lunchtime. He LOVES placing his food orders on his own. ;-)

The second was taken later this evening during dinner. He was acting pretty goofy throughout dinner (mostly to get out of eating his food I think!) but I couldn't resist snapping a quick pic during this little stunt. I asked if he was practicing yoga. He said no and told me it's what ninjas do.

Callum's counts were down again a bit this morning, so as you can see, we're still here. But more than the counts, we received some more "bad" news. I put it in italics because it's not so much bad as it is perplexing and has us all scratching our heads.

Whenever Callum is admitted due to an infection, one of the first things they do is take a blood sample for cultures, to make sure an infection hasn't spread to his blood or his port. Monday's results came back negative (they take 48 hours before we have initial results and then another several days to grow after that if there's anything), but Tuesday's results came back positive!

This is very strange since he's been on Vanco (a strong antibiotic) since he was admitted (and it just so happens the bacteria that popped up responds very well to Vanco), and he doesn't appear at all sick (if he had an infection in his port or in his blood he'd be so much worse, fighting a serious fever and really looking and feeling awful). So, the doctors are almost certain it's neither of these things but instead a contaminate that was introduced during the collection process (from his draw to the bottle). Still, we can't rule it out, so we're staying another night (at least) and they're running another round of cultures (one from today and another from tomorrow to test). So, we will see.

In the meantime, the home pharmacy nurse also paid us a visit, to teach me how to administer Vanco via IV at home.

Yes. You read that right. AT. HOME.

Kinda nerve wracking! But once she walked me through it, I *did* remember a lot from our days flushing his PICC line, so it wasn't as bad. Still, this should be interesting!! The doctors feel like he's doing so well and really just hanging out for his IV antibiotics, which I can do for him at home. So, unless something else crops up tomorrow (like the preliminary results of his cultures don't look right), sounds like they're going to send us home.

It's been a lot to take in this week. I told my Dad the one thing about all this crap happening in the hospital is it's helping to keep my mind off our long weeklong wait for the LP next week. So at least there's that. :)
Posted by Mama Bree at 8:12 PM