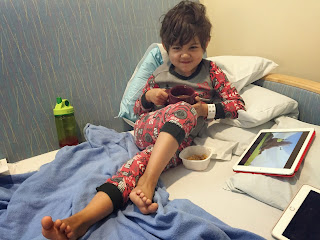 Yesterday morning started off just peachy. Neither of us slept well, but once I got a bit of hot cocoa and frosted flakes in the little boy, and set him up with some movies on his iPad, he was in a pretty good mood.

Except for when he would yell at me for taking so many pictures, like this one, scrunching up his nose in disapproval. ;-)

The attending came in late, about 1pm, to discuss our case. Callum's counts had improved and his toenails were looking a million times better. So, she thought, if he continued on this upward trajectory, we could get discharged the following day (today)**.

Then she said, but there's something else I need to talk to you about.

We found a couple of abnormal cells in his spinal fluid (from yesterday's LP).

What do you mean?

As you can imagine, my head began reeling and I think I only heard 75% of what she actually said next.

Essentially, this can happen from time to time, that some abnormal cells will "sneak in". Everyone feels it's too early to be too concerned and most likely due to the infection he's fighting, but of course the worst case scenario is he's having a relapse and we may need to start treatment all over again. So, we need to be safe and make sure it's the former, and hope it's not the latter.

They want to recheck his spinal fluid again in a week, so we'll know more then.

In the meantime, we are now strapped in, and in the middle of, yet another stressful roller coaster ride.

(**His counts dropped some today - Wednesday - so we're staying at least another night...)
Posted by Mama Bree at 3:15 PM