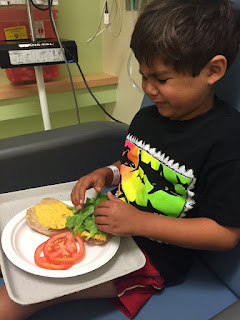 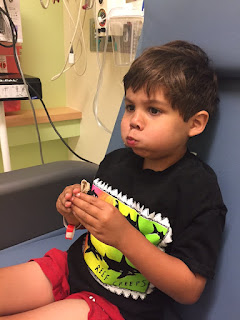 I told him after our visit with the doctors (and his chemo), he could have a cheeseburger for lunch (he liked the ones at the hospital). So, he was dreaming about it all morning.

Of course, we were late *and* the clinic was super slow to see him for his vincristine push. So the minute we were admitted to a room he begged me to go get a cheeseburger for him (and since I knew we still had a while to wait, I thought that would work out).

The first pic is of him putting the cheeseburger together - but he quickly started crying because the lettuce kept falling off (it didn't help that he had torn it all into little pieces!).

The next pic is of him INHALING the monstrous cheeseburger in just a few minutes flat (this is also a problem during steroid week - since the food calms him down and he's in heaven - but he eats so fast that his stomach usually hurts and he has to deal with a lot of gas after). *sigh*

Thankfully, last night was his last dose for this cycle. So we should be back to normal in a couple of days (just in time for school to start!). :)

(All went well with his chemo and numbers look fantastic too!)
Posted by Mama Bree at 3:12 PM