While, for the most part, we truly had a blast in Hawaii - there were a couple lowlights of our trip. The big MOM FAIL was picking a luau which was located right along a grotto in the dead heat of summer.  Which meant that while we sat sweating our balls off watching the luau dancers perform on stage (which was surrounded by a very still stagnant lagoon), we were also getting chewed up by the local mosquitoes.

Callum was sitting in my lap to see better but was really tired and cranky and wiggly and losing patience by the minute.  So, about half way through the performance, he and I ducked out early and walked around the gardens for a bit, waiting for Jon and Logan to finish seeing the end of the show (Logan remembered seeing a luau before and was waiting for the fire dancing routine).

I was telling a friend recently that I get really frustrated with not having many family photos to showcase.... and while I know I could hire a photographer and have a session or two done, I just never get around to it.  And, let's face it, my boys get sick of me snapping pics with my phone in a span of 30 seconds, so I know they REALLY won't put up with a 45 minute professional photo shoot.

So, over the past year or two, I've decided to LOWER my standards.

And suck it up and pay the RIDICULOUS tourist fees that events charge you, for a posed family photo that never EVER comes out the way you'd like it to come out (because, it's usually taken without any preparation whatsoever, as you're standing in line, being herded from one point to another, right??). 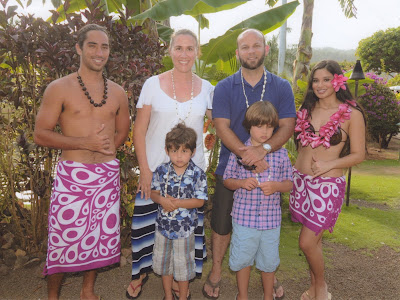 So, after hearing my story above, you might think that this lovely gem was taken AFTER the mosquito biting fest in the blazing sun.  But noooooo, it was actually taken a few hours BEFORE.

Hindsight being 20/20, I guess I should've known the night might quickly spiral downhill from there.  ;-)
Posted by Mama Bree at 11:35 PM