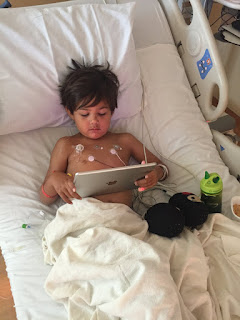 About 3:30am last night, Callum woke from a coughing fit and was having trouble falling back to sleep. I laid down with him and noticed he was shaking violently. Chattering teeth. It basically seemed like extreme chills, except that he didn't feel hot. I took his temperature and he wasn't feverish - so we thought, maybe he's just anxious about the surgery tomorrow? but no matter what I tried to do to get him to relax, he couldn't calm down the chills.

After about 15-20 min of this uncontrollable shaking, I finally asked Jon to call the on-call doc. After a few minutes of chatting, they said we should bring him into the ER, just to be safe.

As we were getting dressed and packing up to leave, he threw up all over the place. It didn't feel like a good sign. :(

We checked into the ER about 4:30am. I could tell he was getting warmer and warned he docs he might be spiking a fever soon. They got fluids, Tylenol and antibiotics in him pretty quickly which was good. Even still, with all of that pumping in his veins, his temp creeped up to 100.5 (I wonder what it would have hit without all of that!).

Lab results came back and he was not neutropenic, which was good to hear. But his heart rate was really high - averaging around 150, and spiking up to 175 at one point (his normal HR sits around 100 or so).

So, even though he wasn't neutropenic, the doctors decided to admit us. They didn't like the fact that his temp was creeping up nor the fact that his heart rate was so high (does anyone but me have deja vu?!? This is what happened to him about a month into his treatment - when we were preparing to get his PICC line removed and get his port line put in!!) :)

About 7:30am or so, we were admitted to our room and walking thru the new team of docs and nurses on what the last few hours have been like.

Callum's surgery was, of course, canceled. I asked the ER staff (dr's, nurses, whoever would listen) to let the surgery center know we were in the ER and wouldn't be making our 6am check in. Multiple people said no problem, they'll be notified, don't worry about it.

And then I got a call about 7:15am from the surgery center with a "Hey, what happened to you? Are you guys still coming??"

He's been doing much better all day today. He's had a couple moments where he doesn't feel well and complains, but for he most part, his miserableness went out the window the minute we entered his inpatient room.

Over the last couple of months, Callum has lamented to me several times, how he's going to miss the hospital stays. I've half joked to the staff that this must've been his way of getting one last hurrah in before we were finally done. ;-)

I've also been joking with the staff about how ironic it would be, if he has an infection in his line, which requires them to pull it out. I don't think that's what's going on - we all suspect it's just this cold/virus he's been fighting. But still, the timing of this all!

Right now, the plan is to keep him under observation for at least 48 hours. So, the earliest we'll go home would be Sunday. All of us feel like that will likely happen, given how well he's been doing today (no more fevers, even after the Tylenol wore off, and so far the blood cultures haven't grown anything - which is good!). But you never know how these things will turn out, so we shall see.
Posted by Mama Bree at 5:05 PM