2 dogs down for the count 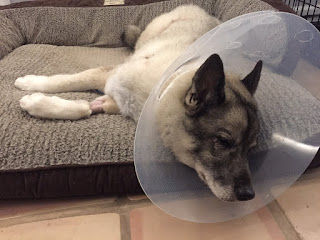 Because one dog running around in his cone of shame wasn't enough in our household, we now have two!

Odin has suffered from an enormous (and unusual) amount of sebaceous cysts (Elkhounds tend to get cysts but just a couple in their entire lifetime - not riddled across their entire body at all times, like poor Odin).

These cysts are benign, but *can* get infected (usually because he'll bite at it, it opens and then an infection ensues shortly after). So, I'm constantly cleaning them, clipping his fur around them (because his double coat thick fur contributes to the infections) and medicating if I think an infection may be starting.

On Saturday night, during my usual cleaning routine, I ran my hand, quite accidentally, down the inside "armpit" of his forearm, near the inside of his elbow. Odin immediately yelped and nipped at me (which he never does). I had Jon help me lay him down so I could take a look at the inside of his leg and sure enough, he had a cyst that looked quite infected and irritable (and ready to pop!! Yuck). I decided to leave it alone because I didn't want to hurt him....

On Sunday morning, while letting him outside, I noticed his shoulder and forearm were extremely swollen! Like, 3x the size of his other leg!! I gently felt his leg and examined it (which he was quite nervous about and getting ready to nip at me again) and could see the cyst had burst open but his entire leg was quite swollen, hot and red underneath. I decided we better take him to the emergency vet because it was clearly infected and seemed to be quite horrible, having taken over most of his leg overnight (poor guy). :(

So, I spent most of Sunday back and forth with the emergency vet. They were alarmed at how severe his infection was - and told me he was in a considerable amount of pain (which made me feel like shit, for the record!! But they did say it's really hard to gauge pain in dogs because they hide it so well and will rarely actually vocalize it). *sigh*

They sedated him while they poked around and cleaned out the wound as best they could. They also did some labwork and took a sample of the cyst to run at the lab (just in case! But we're all pretty sure it's going to come back benign as all his others are) While he was under they gave him some antibiotics and pain meds - and then also sent me home with several bottles of meds as well.

Because his leg was still infected, they didn't close the wound up - so instead bandaged it up with a stitched dressing (essentially stitched a bandage onto the wound so it'll stay on for a couple of days). But, because he has a dressing and open wound, we need to take him in every 24-48 hours to examine the wound and redress him, while we wait for the anibiotics to do their job and kick the infection to the curb.

Once the infection is gone, in a week or so, we will likely need to do surgery, and have the cyst removed. Because of where it's located, the vets are worried it could reopen in the future and create another bad infection all over again. So the best thing to do with nasty cysts like this one, is remove them (something we've done for a few bad ones in the past, so it's not unknown to us).

Still, the whole ordeal has really worn me out and added another layer of stress on both Jon and I (not to mention all dogs!) this past weekend. So much for relaxing a couple last days of the holiday before returning to school/work! :)

I'm now chatting with several of the vets on a first name basis....and taking multiple calls from them a day. Luckily, they're really easy to talk to and are so loving and caring about our zoo. And, thankfully, both dogs seem to be doing tons better minute by minute, hour by hour (and day by day). :)
Posted by Mama Bree at 10:33 PM