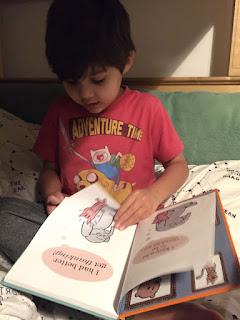 I just realized I haven't blogged in a couple of weeks! So, I'll try to catch up.

This pic is from a couple of weeks ago, after a late night and morning of crummy nausea - Callum had gotten super ill the night before and threw up in the middle of the night (always fun when it's on you and splattering all over the floor and you're half asleep trying to bathe him and clean the bedroom!)

It turned out to be a 24 hour thing, thank goodness. So, he missed the next day of school, but recovered later that weekend.

Unfortunately, Logan got sick a few days later so then I was playing nurse, caring for him for a few days. And THEN, Callum caught whatever that head cold was that Logan was (and is still) fighting. And then I got a bit of it and now Jon is battling it. Fun times!!! ;-)
Posted by Mama Bree at 10:47 AM