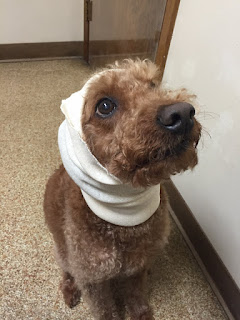 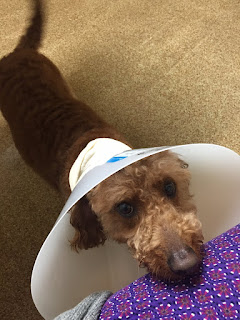 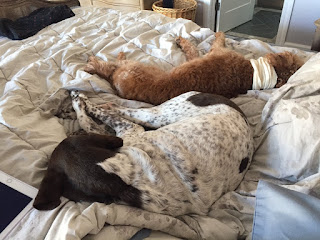 When we were in Texas, we arranged a boarding service to take in our dogs. I like to call it "Doggy Camp" since it's a 10 acre piece of land in the mountains where they can pretty much run and play freely with other dogs their size.

When they came home on Thursday, I noticed Grover was scratching his neck pretty regularly. I assumed he had a flea bite (not unusual given they just rolled in from Doggy Camp where it was muddy and dirty and filled with other dogs)....so we bathed all of them to clean them up. After bathing, I noticed Grover's neck was actually pretty red and agitated and he had what looked like a puncture wound! (Right where he had been scratching)

I couldn't imagine what dog would want to attack him - he's seriously the most passive and lovable little guy - so I was pretty upset. I rushed him to our vet who squeezed us in between their packed schedule. They shaved him down and we could see another puncture wound plus a lot of abrasions and extremely red/raw skin. It looked awful. He also had a very high fever. :(

The techs cleaned him and gave him some fluids to help calm the fever down, while we waited to see the vet. I noticed the skin on the top of his head and in his ears looked red, like he was developing a rash, too. It was a really odd set of symptoms.

When the vet looked him over, she was also a little puzzled by it all. She examined the wound more closely and decided it wasn't actually a puncture wound (tho it definitely looked like one at first glance), but probably more likely a sore. Since Grover wasn't with us for the last 10 days, it was hard for any of us to know what really happened (I had also been furiously texting with the boarder to find out if there had been any scuffles or other odd behavior but she said he was as happy as could be!)....

Anyway, she thinks it's probably a sore which he then scratched and/or somehow got infected (given he was on a huge ranch during a rainstorm didn't help his chances of keeping it clean)....the fever was due to the infection, as was the rash, which she thinks was his body's way of reacting to it all.

She loaded him up on antibiotics, antihistamine and anti-inflammatory meds (and sent me home with several bottles as well) before we headed back home. They also outfitted him with a funny little cloth to keep around his neck that makes him look like an old woman :) and when we're not home (which, luckily, hasn't been too often since he hates the cone and walks into everything with it), we put a cone on him too, all to try and keep him from scratching his neck which would seep and bleed the first day, but is sooooo much better now and is starting to heal.

The good news is, he's getting TONS of attention and is totally milking it by snoozing on the bed with me 24/7. (But, as you can see, Tobey gets jealous of all the attention on Grover and usually wiggles his way in between us so that he can be closer to me than anyone). ;-)
Posted by Mama Bree at 9:02 PM