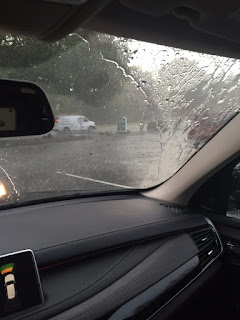 In addition to caring for sick dogs and sick kids, we've been weathering some pretty crazy storms too!

I had just dropped Callum off at Math Wizards (a class he takes with other neighborhood kids, before school), and thought I'd just run to the local coffee shop quickly and pick up some caffeine, before heading back to Math Wizards (it was my day to walk the kids to the bus stop).

It was cloudy, but dry, when I dropped Callum off... and no more than 5 minutes later, it was pouring like crazy, with thunder and lightening to boot! Because it hadn't been raining, I didn't have an umbrella or anything! So I sat in the car and texted Jon this pic, as I waited for it to subside (it didn't, so I ended up running in and getting soaking wet instead). ;-)
Posted by Mama Bree at 10:37 PM