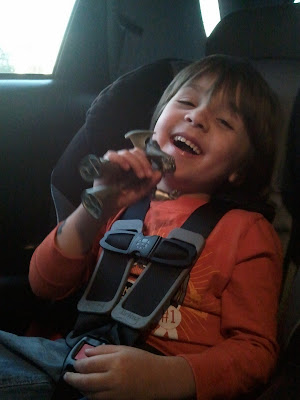 Today Logan had his 4 year checkup. He was his usual chatty self, having no issue at all telling everyone at the Dr's office what he got for his birthday, what kind of cake he had and how many toys he got. Dr. Safir was delighted with how easy it was to engage in a conversation - he said Logan's social skills are super, and while his chattiness may drive us nutty at times, it's something we should enjoy and be thankful for (which we actually are!).

Side note: after we parked, got out of the car, and started walking toward the Dr's office, Logan crossed his arms firmly across his chest and said in a very defiant tone, Mama, I do NOT want any shots today!

Thankfully, we didn't have any shots this visit. ;-)

He's hovering about "average" on his physical abilities (specifically, balancing/hopping on one foot across the room) so if we wanted to encourage any area of development over the next year, we could work with him on that. But, it's not of any real concern of course. Cognitively, socially, mentally and physically (health wise) he's a perfect example of a 4 year old kid! (Dr. Safir commented he can't remember when he saw Logan last, and that's a good sign, since he's so much healthier than his little brother seems to be - and I would totally agree!) I mentioned we are most frustrated with his bad behavior and TERRIBLE habit of not listening - Dr. Safir just sighed and said that comes with the territory of a 4 year old, and particularly of boys.  :/

He weighs 39 lbs and is 40" tall. However, now that I'm looking at last year's stats, he apparently hasn't grown a fraction of an inch, and I'm certain that isn't right. So, either I copied the numbers down wrong, or we didn't get a good measurement today (the latter being highly likely, since Logan was being his usual misbehaving self and wouldn't stand up straight nor still for the nurse!). Maybe I'll try measuring him tomorrow morning just to see (I'm now very curious).

Anyway, all in all a very good visit.

THEN, fast forward to this evening, where Logan had, what I think may be, his first panic attack (so much for a healthy well balanced kid, eh?!). I'm not exactly sure now what set him off - but it was likely the fact that I told him he couldn't watch a movie and needed to come sit at the dinner table, even if he wasn't hungry (BUT I'M NOT HUNGRY!). He started a complete crying, heaving meltdown at the table, which I put up with for about 2 minutes, before I said that was enough and shuffled him to bed. I told him to lay down and relax, and when he stopped crying and was quiet, he could come back out to be with the family.

Callum and I ate dinner while we listened to Logan escalate into a worse and worse state. He was increasing into a choking, hyper-ventilating, uncontrollable sobbing mess . It was pretty bad and he never calmed down (usually he does after a couple minutes of crying and feeling sorry for himself).  I went back to check on him and he had this very upset fearful look in his eyes. He told me he was trying to stop crying but couldn't (his throat wouldn't let him - which I think meant he had some sort of gagging or choking reflex - but I really don't know).

While I kept trying to relax and calm him down, he wasn't able to, which I think made matters worse since it started to scare him quite a bit. I tried getting him to take long deep breaths to calm down, but that didn't work. I tried rubbing his back, talking to him softly, holding him close, but nothing worked. I was finally able to get him to slow down his breathing by counting very slowly. He couldn't focus enough to count with me (which is what I was trying to get him to do) but he was calming down by listening and watching me (I was holding up my fingers as I counted).

He was still pretty touch and go for quite awhile but slowly, he started talking to me, between interrupted sobs or catches in his breath. When his throat started to act up again (choking/gagging?), tears would well up in his eyes and he'd be back at the uncontrollable crying and hyperventilating state. This went on for a good 10-15 minutes I think. But, he finally calmed down long enough to tell me about his throat - so I asked him if he'd like some water. He seemed to think that'd be a great idea and after we discussed for several seconds whether he should come with me, or if I could leave him alone for a few minutes to go get him a cup of water, he finally agreed to let me go. He started feeling MUCH better after several sips of water, and finally felt calm enough to smile and actually tell me, Thank you Mommy! Which of course, about broke my heart.

A few minutes later we were back in the dining room, eating dinner (because he was now very hungry) and if you walked in at that moment in time, you would have NEVER guessed that my son was just falling to pieces a short time before.

I may give the Dr a call in the morning just to relay the story and see if there's anything we should do, but my guess is that either this was a one time freak deal, or something we'll just need to keep an eye on (what are his stress and triggers, etc.) as he gets older.  Always fun! ;-)
Posted by Mama Bree at 11:13 PM