A couple of years ago, I drafted some thoughts on Twyla along with a few pictures I took of her at the time, but never remembered to finish posting to the blog.

Sadly, this will be my last on Twyla. As luck would have it (good or bad), we happened to see Twyla lying in the middle of the street (one block over from our house) on our way to a friend's house this evening. I recognized her half a block away and saw she was still alive, mouth open, likely meowing for help, so I made Jon pull over immediately so we could check her out.

Sure enough, it was our precious little Twyla.

She was badly hit, with a terrible head injury (I'll spare the details), but still moving slightly and trying to get up. Jon called animal control and went back to our house to get some towels to wrap her in, while I stayed guarding her from any more trauma, directing oncoming cars to slow (the hell) down and move to the other lane to go around us. A couple of people stopped to ask if I was ok -- I explained that someone had hit my cat, and we had just found her -- while uttering those words out loud, I could feel my chest get heavy, my eyes start to swell and my throat catching.

While we had given up on keeping Twyla indoors (she was always very feral and skittish), she was still my cuddly fur ball. The first pet that Jon and I both found and owned together.  And the thought of losing her, right there at that moment, in front of me, pained me.

It felt like eternity, but was probably only 10 minutes, before Jon showed up again, with the truck, some towels and a box to carry her in. Sometime during the time that I was waiting for him and reassuring her that she was going to be okay, she died. While it was an awful way to go, I'm glad I was there with her during those last few moments of her life (and can only hope that me being there helped comfort her some).

We love and will miss you Twyla dear, but hopefully now you've found a place where you can happily dance forever. 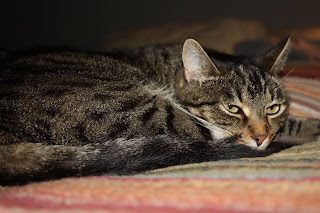 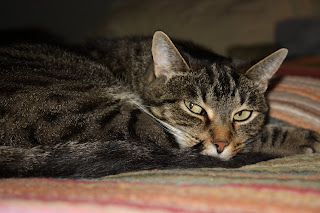 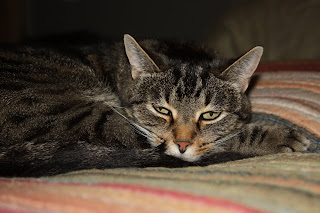 And then there's Twyla. The one who gets stuck on roof tops and is scared of everyone, and I mean everyone, except for me.

She's light on her feet, she runs on tippy toes and scuttles out of sight at a moment's notice. But, when she sees me lie down on the couch or bed, it's cuddle time. She immediately jumps onto my chest, kneading nonstop, with her butt in the air begging for pets, until she can finally find a comfortable spot to lie down on.

She's our most petite cat by far - yet over the last year she's definitely been putting on the weight. She's hardly home long enough to eat a few pieces of kibble, so we're pretty sure she's getting food from the neighbor's.

As quiet as a mouse as she is (her mews are fainter than a kitten's), she's been known to leave scars (on friends) with her razor sharp claws. Yet she still holds that special spot in our hearts and I'm always thankful the day we found her and decided to bring her into our home.
Posted by Mama Bree at 8:10 PM