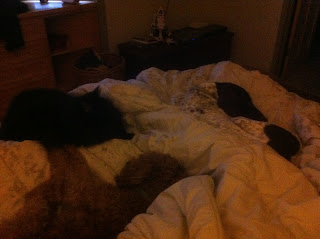 It's now Jon's turn to travel (he won't be back until next week -
ugh!) and his flight was super early yesterday morning. I also had an
early morning meeting and knew I wouldn't be able to juggle getting me
and the boys out of the door on time. So, I asked my dad to help out.

It was a good thing I did, too!, because Callum had just barely woken
up as I was walking out the door and Logan was still snoozing away (I
think the time change may have also contributed to them being off).
I'm so grateful my parents live close enough to help out in situations
like that! (Thanks again Dad!!)

My dad said they were great getting ready and dropping off at school
but he did have a couple funny stories about the boys. Since Logan was
still sleeping, he had some time to hang out with Callum alone. I
guess Callum was ready to get going (I don't remember exactly how they
got to the conversation so I may have it wrong) and my Dad said,
"Well, I think I'll have a second cup of coffee."

Without a skip, Callum responds, "and I'll have a second cup of juice."

Such a funny little guy! :)

Oh, and this picture? This is what happens when Jon travels. Two dogs,
a cat, and who you can't see is Logan curled up next to me. He doesn't
seem to mind when Jon travels, mostly because I'll let him sleep in my
bed every now and then. ;-)
Posted by Mama Bree at 8:13 AM