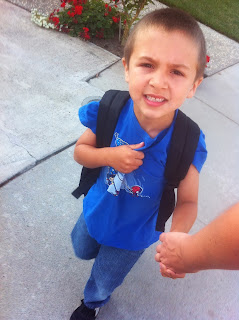 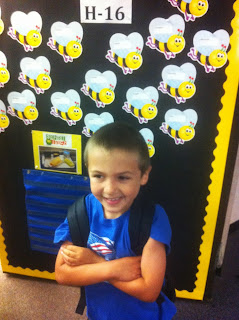 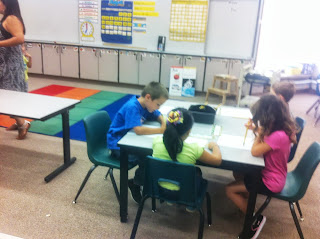 Just dropped Logan off at school!

We got to the school 10 min early but there was absolutely no parking
for blocks. So, this first pic is of the two of us speed walking to
school (Jon and Callum drove separately but they couldn't find a spot
so we said goodbye on the phone instead).

Logan and I reached the main gates just as the first bell rung.
Luckily, it was chaos with kids and parents everywhere, so we were
fine. ;-)

We found his classroom (second pic is a quick snapshot of him standing
in front of his bumblebee name which you can't see), signed in with
his teacher (where he insisted on informing her he can't read yet!
LOL), dropped his lunch and snack off in the food basket and he hung
up his backpack on his own.

We found his name tag/table where he'll be sitting and he immediately
sat down and started practicing his lettering on a sheet of paper they
had out for each student (third pic I snapped quickly as I was
leaving). :)