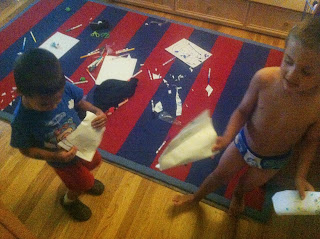 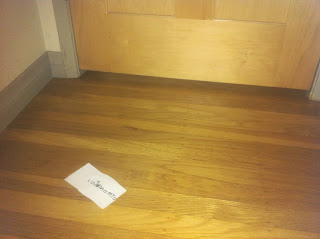 I've just started a very intense phase of my project where I'm on all
day calls, I leave "early" (4pm) to pick up the boys, then jump back
onto calls starting at 6pm until we're done (last night I was done at
8:45pm, but tonight I was done at 6:30pm - woohoo!).

Thankfully, the boys are pretty good about keeping themselves
entertained (for the most part!) while I'm on these calls. One of the
activities that Logan has gotten into (and gotten Callum involved as
well) has been cutting up and "writing" cards for us.

The first pic shows the damage they've done (and are very proud of).
The second pic shows one of Logan's notes he slipped under the office
door to me, while I was on my work call. :)

(It says "To Mom Logan", but backwards. I'm trying to teach him left -
right alignment, but it's taking a few tries to sink in since he
doesn't yet read! LOL)
Posted by Mama Bree at 6:34 PM