Yesterday we got together with several neighbors up and down our street for a big block BBQ party. One of the neighbors down the street thought to organize and put it together - I helped her out a bit with the planning - but mostly just participated and did my best at being a good neighbor. ;-) 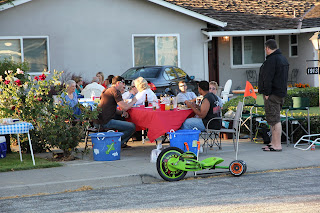 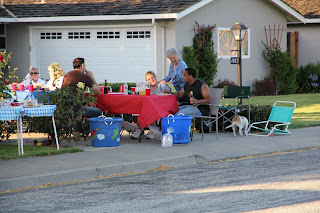 Jon did more socializing than I did - since I was either nursing Callum, taking pics, or chasing after Logan. Ah well, I still got to say hi to a few of the neighbors. 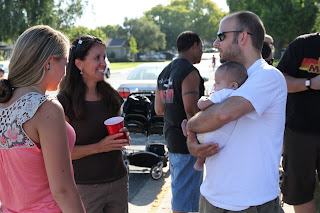 Like this fun couple (the son and wife of our next door neighbor). 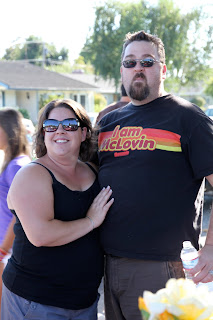 And these hilarious ladies. :) 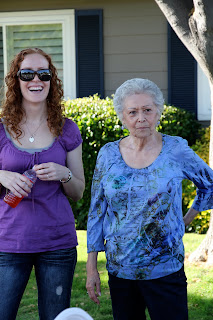 These guys spent the entire evening convincing me why we should take their son's Jeep (see below)... 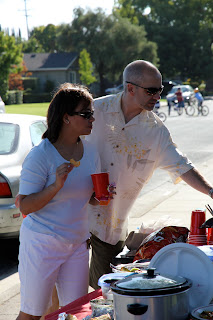 Donna (on the right) came up with this brilliant party idea. It was such a success, we're talking about making it an annual tradition. I love living here! 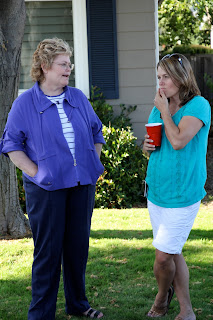 Suffice to say, it was a blast! We had three grills out for folks to grill the meat of their choosing on... we had several tables laid out for people to sit at, drink, eat and be merry. We laid out all sorts of yummy desserts and side dishes on another few tables. We blocked off both ends of the street with cones and then let the kids go wild riding up and down the street on their bikes, scooters, (automatic) Jeep, you name it. 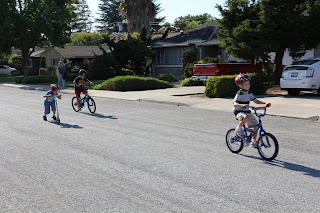 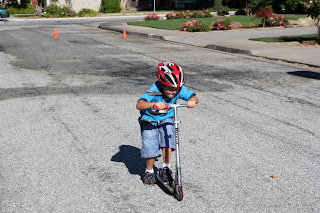 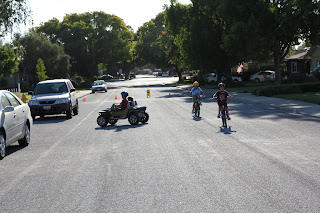 On our lawn, I set out several toys so that the younger kids could still play and have fun without getting trampled on by big kids racing on their bikes (since it could be, at times, a bit intimidating!). That turned out to be more of a hit than I had imagined - with the older kids also coming by to swing at the bat, golf clubs, basketball hoop or toss 'em game, every now and again too. :) 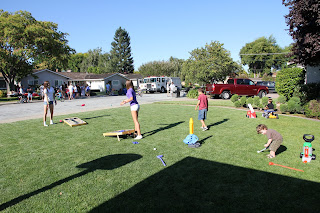 Except for a couple of girls who are in high school/college, and the newest born baby on our block (just one week old), the entire block of kids is BOYS BOYS BOYS with most families having two boys or more! It's like we were MEANT to move onto this block and have our boys grow up here or something. ;-) 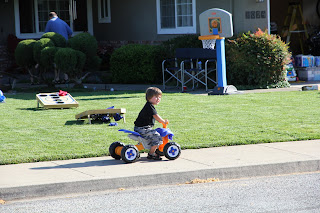 Our next door neighbor is a Fire Captain, so he called up some of his buddies to stop by with a fire engine for a bit. What a huge hit! The kids got to climb in and around the fire engine (I missed some of it due to nursing Callum, but I hear Logan enjoyed that), as well as spraying water from a hose. 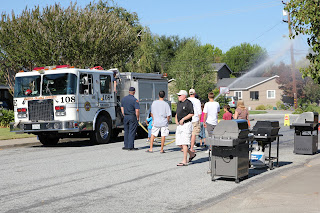 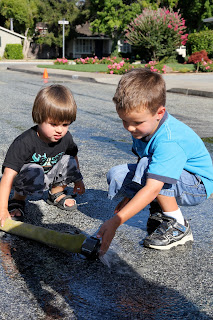 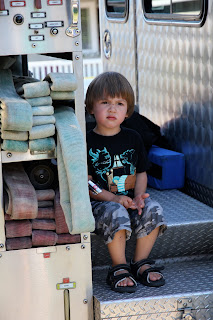 We concluded the fire engine visit by rounding up all the kids (as many we could at least - it's like herding cats to get a group of 2-8 yr old boys together!) for a group picture before the firemen had to take off. 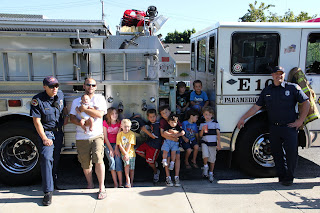 About half the boys/kids on the block!
Logan had a blast. He was enamored by all the big kids and how fast they were able to ride their bikes along the street - but more than that, he fell in love with our neighbors' automatic Jeep truck, which we may be inheriting since their little boy has outgrown it. I'm not sure if that's a good thing or not (it's monstrous!). 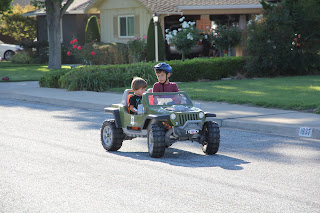 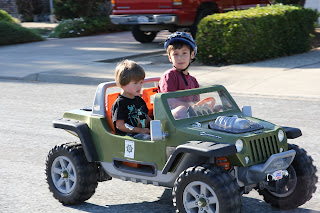 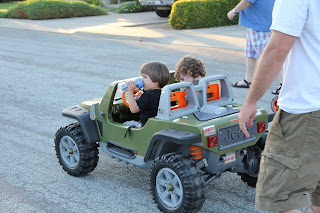 Seen (briefly) drinking and driving....
Callum was also a wonderful sport - not really kicking up a fuss until the very end of the night when it was time for bed anyway. He was mostly content to just hang out with Jon or I, drifting in and out of sleep while we hung out chatting and watching the kids play. Jon and I did a lot of man-on-man defense - where the one without Callum was responsible for following and chasing Logan down to try and keep him out of trouble. That was DEFINITELY the more exhausting of the two jobs. ;-) 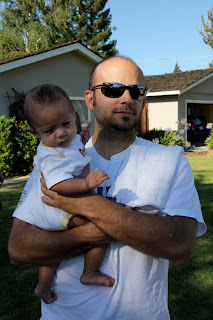 It's days like these that make me appreciate our block so much more - and make me extremely happy about our decision (which felt like a huge big, potentially risky decision at the time) to move to this house. Yay for living in the 'burbs! hehe :)
Posted by Mama Bree at 7:08 PM

This is all SO SO SO SO awesome! I love that this type of community still exists.