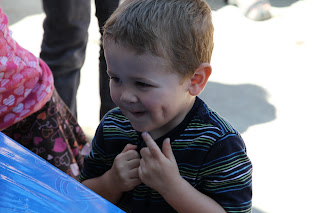 This past weekend not only did we host a spectacular BBQ on Sunday, but we went to a fantastic Spiderman themed birthday party on Saturday for Logan's BFF Robert. We have been biiiiizay!! 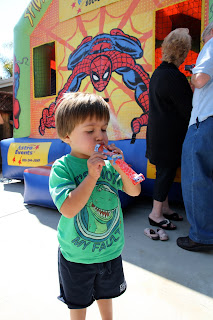 Logan and I arrived first, leaving Jon home with Callum who was taking his morning nap. It's funny - last year, Logan slept for the first hour or so of Robert's birthday party. This year, it was Callum's turn. Not sure we'll have a three-peat but I figure twice is noteworthy. ;-) 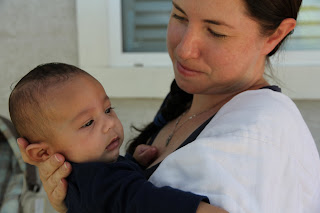 The Jodoins had rented a bouncy house for the kids to get their jump on - Logan was a little overwhelmed and intimidated with the grownups or larger kids inside (he's never been ECSTATIC about bouncy houses to be honest), but finally warmed up when it was just him and Robert... 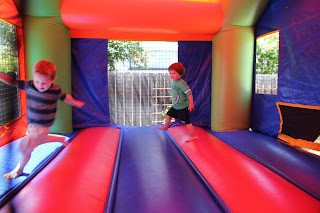 There were also toys and slides and tricycles abound. Food was aplenty and oh so yummy! There were plenty of places to sit in the shade and catch up with friends. As the day grew on, we decided to throw the kids in the pool for a bit. Logan had little floaties on his arms the entire time and for the most part, paddled around solo (Daddy being in arm's reach away). He seemed to enjoy the pool time much more on his own with the floaties so I may try and get something like that for him when we go to Hawaii (have I mentioned we're leaving NEXT WEEK?!) - we'll see. 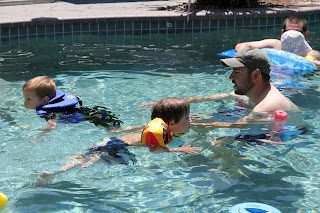 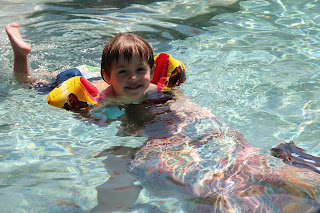 I was inside nursing Callum while Robert opened his presents, but I hear he loved everything he got. Right now he's into bugs bugs bugs, so we went in with the Hicksons and Chouns for a few bug themed gifts. He and Logan had a blast hunting for bugs all afternoon once they were up from their nap. :) 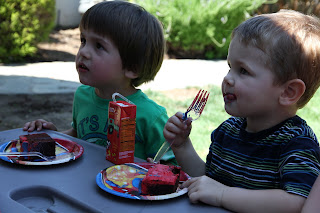 Because we needed to get home and start prepping for our own party the following day, we invited the Jodoins over to our place for dinner that night (every one else, by then, had gone home). The boys continued their play for a few more hours before we called it a night - as always, we had a fun filled (and exhausting) day with our friends. 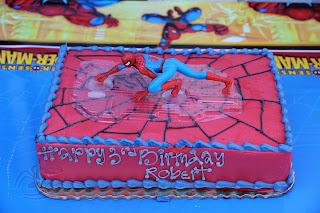 (Click on any of the pics above for more from Robert's birthday!)
Posted by Mama Bree at 11:24 PM

I really appreciate you taking all these pictures! They turned out great! I am glad you guys could join us in the celebration!