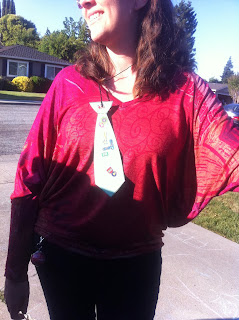 Callum got really upset this afternoon during a Father's Day snack
time event that the school hosted, because neither of us showed up (I
had totally forgotten about it and forgot to tell Jon about it since
he was traveling again this week). :(

I guess he cried for some time, asking for me (since some Mommies
showed up with the Dads too). :(

But by the time I picked him up he was his usual self and very proud
to put this tie on me (which he made for Jon, with a card as well).
Logan took the picture. ;-)
Posted by Mama Bree at 6:51 PM