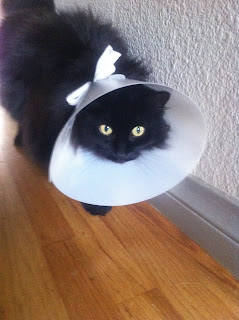 I'm still trying to absorb and process the shocking news, but it
appears our little Izzy may have cancer. :( We'll know more in a
couple of days after the lab results come back but the Vet is pretty
certain.

Just a few days ago, Jon was petting Iz when he noticed a large lump
on his back leg. It's unnoticeable to the eye, since he's prone to
getting matted chunks of fur, it just looks like another mat. And I
even told Jon it was probably just a mat, but he made me feel it and
sure enough, it was a massive tumor. We shaved some of the fur back to
be sure, but there was no mistaking it.

So, I took him into the Vet's office today to see what we should do.
They were surprised at how large it was, especially side Iz has shown
no pain or discomfort or any signs that he's been carrying around a
growing tumor on his body. :( They shaved all around the area to get a
good look at the damage and it was even worse than I had expected -
pretty much having taken over his entire leg. At first, before we
shaved all his fur off, the Vet was thinking we might need to amputate
his leg. After seeing how massive it is, he's now not even sure if
amputation would help or save him. :(

But, he also didn't want us to get too far ahead of ourselves, and
said we should run some tests just so we know what we're dealing with
first.

I can't help feeling guilty about my not noticing it earlier. But our
Vet also said he thought it was a big clot of fur when he walked in,
and if Izzy is also not home a couple of days at a time (which is
common since he's an indoor/outdoor cat), he could see how this could
be easily missed. Still, it definitely tugs at my heart strings. :(

And now, as you can see, we have to keep him in this horrible cone
(since the shave site also has some sores which he immediately
starting licking)! I thought dogs in cones were bad but this is way
worse (yet also funny watching him walk backwards around the house).
;-)