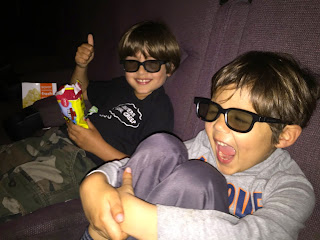 Man, I really love this photo of the boys. :)

Both boys, but mostly Callum, have been counting down the days until the new movie "Home" was to release (today).

I promised them if they were well behaved this week, and especially today at school (because this poor mom has been running RAG.GED while Jon has been traveling), that I'd take them to the movies after school pickup.

Callum is still dealing with a bit of a head cold, and now I've slowly been feeling more and more congested and under water today too, but I decided to take them and chance it anyway, since I remembered the last time we headed to the theatre right after school, it was super empty (and I couldn't go back on my promise since they really have been good kids all week!).

Lo and behold, it really was empty! Even though today was opening day, we practically had the theatre to ourselves (I think the timing is such that, toddlers are still napping and parents of older kids don't want to deal with rushing to the theatre right after the school bell rings - like this crazy Mama did).

The boys and I had a fabulous time and enjoyed the movie quite a bit. If you think I'm lying, just check out those faces (and don't they look smart in those glasses?!) :)
Posted by Mama Bree at 6:45 PM