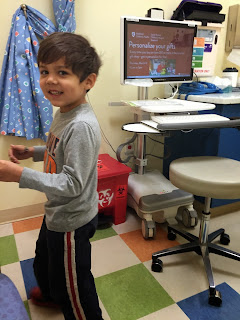 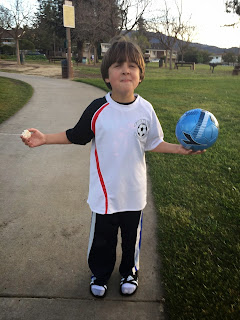 Phew, what a day!

First, Callum and I got up and out of the house early so we could get back to the hospital to check his counts (since, while he was discharged on Monday, he still was quite neutropenic). Here he is looking pretty cute (and older!) with his new haircut while we waited for our team to see us.

Thankfully, there was no real drama with his poke. They had to flush it several times in order to get a good blood return, but I guess that can happen after he's been accessed for so long. Otherwise, it went really well and I LOVED the two nurses working today, they were like swift ninja pros, but still gentle as ever with Callum's tender port.

And, great news, his ANC jumped up to 1021, which means we were able to restart his chemo at home tonight. Phew!!

This evening was Logan's first soccer practice with his new team/league. Overall he had a fantastic time. However, about 10 minutes in someone kicked the ball and it slammed smack into his crotch. He came running over to me on the sidelines - he wasn't yet crying, just stunned. When the shock went away, the pain hit him like a wave, and suddenly the poor guy was beside himself in tears, asking me WHY did it hurt so much?!? :)

After I got him to calm down I said I guess we'll need to get you some protection, like Daddy wears when he plays rugby. He seemed to like that idea, so back to the store I guess I'll go, to see if they've got any kid sized cups to buy (they must, right?!). I certainly hadn't thought we'd need to get some this soon/young, but boy was I wrong!

Poor guy. Other than that, and another incident where he fell and scraped up his hands and knees, he did really well and enjoyed it actually. So, I hope that means he'll have more fun this season.

Funny side note - as it turns out, Logan's coach is an old coworker of mine. It never ceases to amaze me at how small this world is and how many times I run into old friends and colleagues! :)
Posted by Mama Bree at 10:33 PM