Queen of the Leprechauns 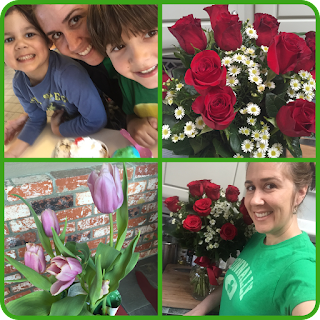 Many friends jokingly refer to today as St. Bree's Day, but Kim told me of a new one that I think I may just have to adopt! Molly wondered if having a birthday on St. Patrick's Day made me Queen of the Leprechauns....

I actually decided to celebrate my birthday over the weekend with a few close girlfriends. We pampered ourselves to a luxurious spa treatment in the morning and then headed to a lovely "Afternoon Tea" brunch. It was really quite nice and I'm really glad we got together.

When I got home from my day out with the girls, I found a gorgeous bouquet of red roses waiting for me from Jon (he had to work, so he wasn't home).

Then, in the evening, Jon and I had a relaxing date night, scarfing down some delicious sushi, taking in a movie (The Imitation Game), grabbing a Boba Tea before heading home, and then catching up on another episode of Downton Abbey before crashing for the night. :)

Last night, Logan actually had one terrible nightmare after another, and kept us up pretty much all night. So, I let him sleep in this morning because he was so tired.

When he woke up, he thought he was going to get to skip school, because it was after 8am - but got really upset with me when I told him no, he'd still need to go to school.

That crankiness continued all through the morning and during drop off - he thought it wasn't fair that he had to go to school on a holiday (I explained we weren't in Ireland, and he didn't get a day off for ALL holidays....) and then he decided he didn't want to go to school because he wanted to spend the day with me, on my birthday.

It was an ugly rough morning so I was delighted to find ANOTHER bouquet of flowers waiting for me on our porch when we got home - this time some gorgeous tulips from Kim and Molly (thank you!).

I exchanged a number of emails with Logan's teacher all morning because, sadly, his funk continued long after I dropped him off. But fortunately, he finally perked up after lunch time and started behaving again. When Callum and I picked him up after chess class, he was in pretty good spirits, thank goodness!

(Although, he did let me know that on *his* birthday he would *not* be going to school!) :)

We three headed out to grab an ice cream treat after school and then came home to hang out together and munch on some leftover pizza (all dictated by the boys of course). Jon came home early, in time to see the boys before bedtime, which they were thrilled about - so they three played a few games together before we put them to bed.