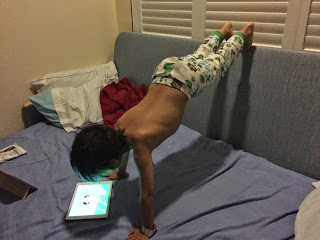 He does this sort of stuff constantly. All day long. Without even thinking about it. He's a bundle of energy (I guess who wouldn't be, since we've been trapped in a small room for so long) and thankfully, remains in great spirits, despite the situation. The doctors love seeing him because he continues to show such positive energy. :)

After a low of 23 yesterday, his ANC finally moved up a bit today (but still very low, he clocked in at 38). I'm proud to say I've been watching the numbers close enough, that I predicted to the doctors yesterday, that I thought we might finally be turning a corner. :)

Now, we just have to keep hoping for the numbers to increase (doubling or tripling is fine by me!) so we can get the hell outta here! ;-)
Posted by Mama Bree at 8:47 PM