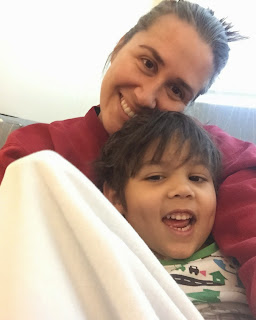 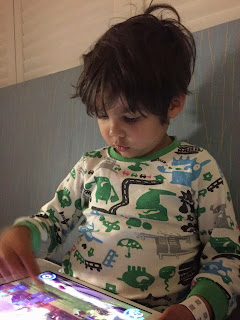 I took this first pic of us on Saturday morning when we were lounging and hoping to go home. The Attending had told me on Friday that as long as Callum's cultures came back negative, we'd be all set to go home. However, Saturday morning that story changed. Callum's counts had dropped and while the cultures were negative (yay!), the Attending changed his mind and wanted to keep us another night.

So, I really let him have it.

I understand when there's a "change in the guard" from one Attending to another (which happened to us between Thursday and Friday), since each doctor will be more or less conservative than another. But to have the SAME doctor switch on me overnight really pissed me off, to be quite honest.

And, he got that message loud and clear. :/

I know a lot of my blow up has to do with the fact that we've been trapped in a room for 6 days too long. And I'm exhausted and stressed and, as I've blogged already, we've certainly been put through the ringer this week, which has made me abnormally on edge and cranky (even poor Jon hears it when we touch base on the phone each day).

But I really don't like being told one thing and then having someone change his mind the next. And, while Callum's counts *are* low, we've been home with lower. And everyone goes on and on about how great he looks and how wonderful his toes look and my how much energy he has does he always jump and okay and run around like this? (Yes pretty much) and on and on and on. But I don't think they really understand the impact to our entire family, by keeping us here. And while I totally get that he *could* have a break and hit a fever when we get home and require us to turn right around and come back, I'm curious how often cases like ours result in that scenario vs. nothing happening and the child recovers quite nicely at home. :)

So, here we are. Sitting and waiting. Watching lots of movies and playing games. With both of us crawling out of our skin, since Callum is still on isolation due to his cold. :(

I did finally lighten up a bit after the weekend. So yesterday I joked with the Attending that I wouldn't mind if he wanted to start Callum on steroids (since steroids will beef up his numbers). Everyone had a good laugh at that and he told me I've been here too long, if I'm saying that. ;-)

Despite my grumpiness, Callum remains in great spirits (he's getting food on demand, gets to play on his iPad freely, and gets to be with Mama 24/7 so who can blame him!).

Yesterday was a week since we were admitted and his port was accessed, which means he was due for a needle change (they have to change the needle in his port every 7 days). It's never a fun process but he did okay. While he was de-accessed and in between his antibiotic doses I had him take a bath, which he loved. He was standing on the tiled bench at the back of the bathtub asking me if I had brought his goggles.

Because he wanted to jump in.