Callum is looking more and more like Jonathan every day.  I love it - I feel like Logan is a mini-me, and Callum is a mini-Jon.  We've got one of each of us!  Of course, Logan's looks changed completely (in my opinion) from his baby days to his toddler days - so it'll be interesting to see if Callum continues to look like Jon once he outgrows his baby face, or if he takes on more of my looks too.


Callum's a joy to be with and I'm so in love watching him grow up and continue to develop.  Of course, the big news this month is his rocking and scooting.  I thought it would take him longer to pick up on the crawling, because he's not good at sitting up on his own for long periods of time, nor can he get himself into a sitting position on his own!  And yet, those things don't seem to matter as he's full steam ahead on MOVING.  He has always loved to kick his legs and stand - but he's doing it more and more now that he has got the hang of his jumperoo, and now that he knows he can sorta scoot around.  He's not great at scooting forward, he hasn't quite got all the mechanics down, but as I posted earlier, he's a pro at scooting backwards (and eventually, getting himself into predicaments underneath furniture!). 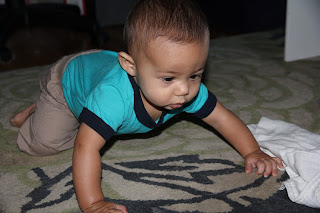 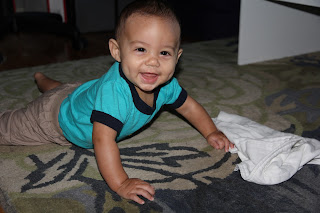 He continues to enjoy being the center of attention, but given his new found interest in movin' and shakin', we're actually able to leave him alone for longer periods of time to explore on his own.  I have to admit I love that.  ;-)  Logan has found a new interest in watching over his little brother as well (since I'll often times set Callum down in the same room with Logan so that they can play together).  Sadly, he mostly loves to torment Callum with a lot of "claw" hands and roaring.... thankfully, Callum is usually in great spirits and takes all of this in stride. 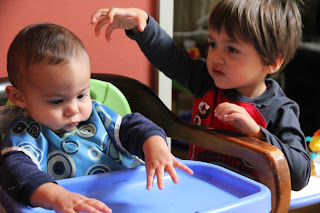 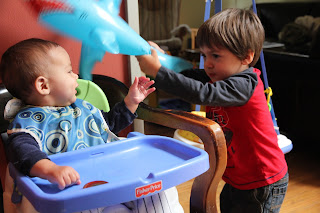 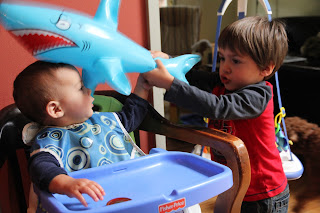 His dexterity is improving each day as well - he's not only able to grab (and hold on for dear life), but he's moving objects back and forth between his two hands (and into his mouth), showing an improvement in his fine motor skills.  He still has trouble picking up smaller objects with his thumb and forefinger, but we've been practicing that as well, with bits of finger foods here and there. 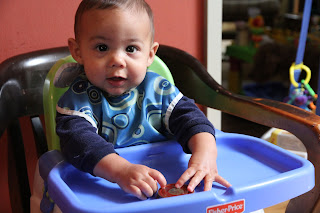 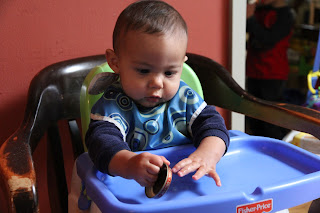 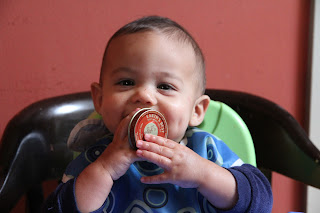 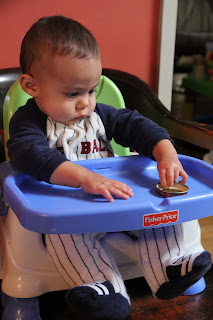 He's also become quite a talker this past month - much more goo-goos, ga-gas, ba-bas, and ughs.  He loves to babble, particularly when he's practicing his jumping or crawling.  I'm not sure what it is but he just puts his entire being into his exercise! 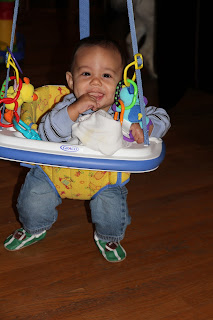 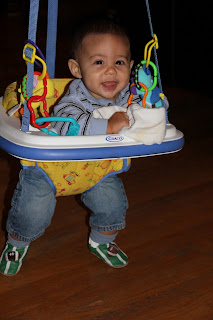 Perhaps his chattiness comes from his continuing awareness of Logan.  Logan talks nonstop, continues to develop a demanding, loving, funny and quirky little personality.  I was describing Logan to a coworker of mine just last week and he said "Gee Bree, I'm not really surprised that your son has quite the personality.  Look at his mom!"  I thought it was a funny, and ironic, comment.  Since I think of myself as the boring wall flower in our family household compared to the boys and Jon.  ;-) 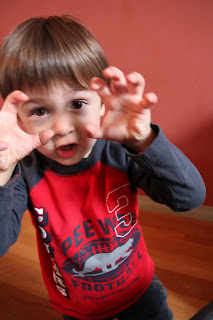 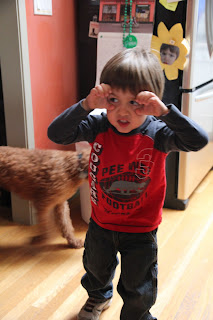 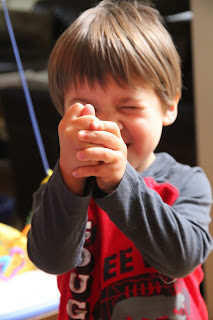 Logan has constant energy as well - and it wears Jon and I out just trying to keep up.  He LOVES school and playtime with his friends, but he's also become more aware of the time he spends at home with Mom and Dad.  Or perhaps he's becoming more aware of our time dedicated to Callum and wants some of his own.  Whatever the reason, I've noticed he asks for our time more - he wants us to play with him, to read to him, to watch TV with him, to lay down in bed with him.  He likes our company and enjoys our time together.  How can I resist or deny such requests?  I have to say, I eat up every second of playtime, cherishing every minute I have with him. 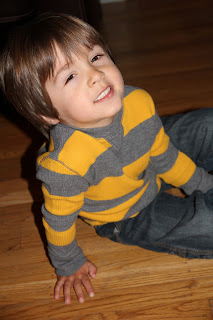 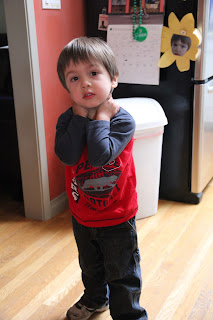 Most of the play time that he and I do together are these wild crazy "Mr. Dinosaur attacks Mr. Shark" episodes, but I've noticed his imagination kicking up a notch or two as well.  He dreams up these funny stories and situations for his animals that we will then enact as we're lying together in bed.  Or, he'll talk to me about what is happening with the characters in the book that I haven't started reading yet.  It's actually quite nice - because as much as he likes to play with us and his friends, he's also content to play on his own, talking to his trains and cars like they are listening, narrating out the story playing in his head, and their (usually) ultimate demise. 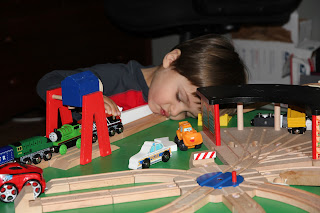 I suppose it goes with having a vivid imagination, but Logan has been waking up more and more each night.  He has dreams that make him cry and dreams that make him laugh.  Often times Jon or I will crawl into bed with him and spend the rest of the night by his side - it makes for a rough night on us, but he seems to sleep much better with one of us there, and to me, that's most important than anything else right now. 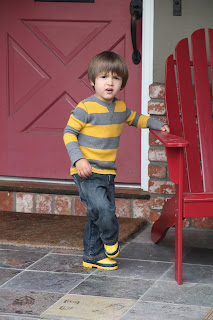 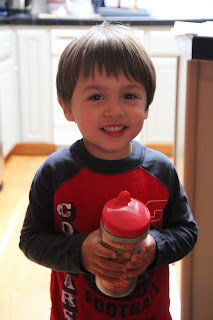