With all the holiday decorations I've been working on, Logan's taken a keen interest in Christmas (strangely, he also keeps asking to see the snow/go to the mountains, which we haven't brought up yet, so I think they must also be talking about all things Wintery at school).

In any case, I thought it would be fun to do one of those advent calendars that my mom had for us one (or two or three?) years when I was small. I found some really gorgeous, non-kiddy ones as I was searching, but the ones I liked were too pricey for me to justify.

One of the sites I was reading, suggested a DIY version, if you were so inclined.  I thought, hey!  what a nifty fun idea, and how hard could it be, really? 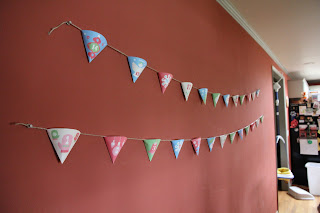 I'll admit it was simple to put together but a (time-consuming) pain in the butt.  :)  Still, I'm pleased with the results.  When Logan saw the two strands hanging up on the wall this morning he asked, "Are we having a party?"  I suppose it does look a little party-ish! 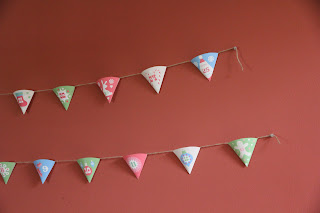 Anyhoo, for anyone else that's interested in doing the same... I bought the template at happythought's Etsy shop.  I used a heavier paper, as they suggested, by cutting up some of Logan's construction paper (to fit our printer and template's 8.5x11" requirement).  Once printed, I cut each little "cone" out and then scored each one, folded and then taped them together.  I used some twine that we had available, which was a bit thicker than what the shop suggested but has a more "homey" DIY feel which I like.  I added each cone onto the twine one by one (spacing out as best I could so that they were all even) and then hung the two strands up along the dining room wall with some silver push pins.  Nothing fancy but I think it'll add a little fun to our countdown to Christmas.  :) 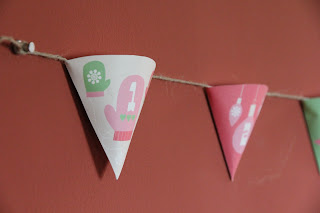 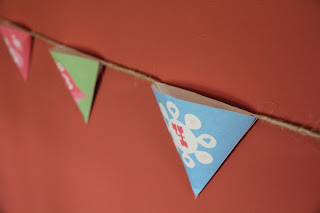 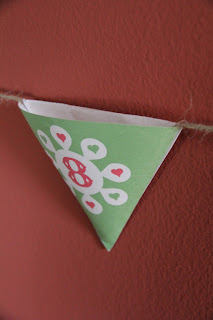 I haven't decided what little presents/surprises to put in the pockets just yet.  They won't hold much - so I was thinking of some small candies, stickers or tattoos.  Any other ideas?
Posted by Mama Bree at 11:52 AM