This year I decided to make the boys' costumes because I had come up with this funny idea to dress them as Thing 1 and Thing 2, ever since last Halloween! I figured, this was the only, and probably last, Halloween where I'd get a say in Logan's (or either) of their costumes, so I was going to take full advantage of it. 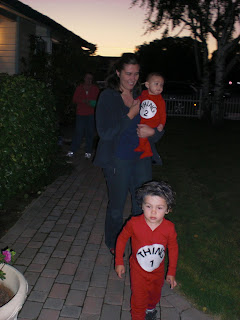 The costumes themselves came out okay - I had also wanted to spray paint their hair blue and spike it up nice and tall with a lot of goop, but Logan's hair wouldn't stay spiked and, as much as he was looking forward to having blue hair, when it came time for execution, he wasn't thrilled about it. In fact, he yelled at me many times to stop. *sigh* 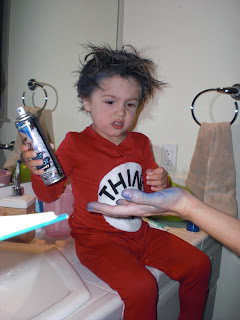 The first party I dressed them up was their school's Halloween party. It was a bit chaotic for me, since I had rushed over after work to get them both dressed and ready for the party. Jon was supposed to meet me there to help out, but work held him up and he didn't get home in time for the party. Had I had Jon there to help out, it would have been a more enjoyable party - because the school really went all out in making it a good time for the kids! (dancing, music, balloon lady, playground, food galore) But I was having a tough time chasing after Logan around the playground with Callum in my arms, so we ended up leaving early.

The costumes were a bit of a "disaster" as well. Logan was totally excited about his Thing 1 and Thing 2 costumes all the way up until he had his costume on and was happily pointing it out to all of his friends/teachers. But, then the other kids started getting dressed around us - out came one Spiderman costume after another and Logan suddenly threw a fit! He no longer wanted to be Thing 1 (started to tear it off actually) and instead wanted to be Spiderman, or Superman, or Buzz Lightyear Mom!!

I had flashbacks of my own childhood - where I thought my mom was evil for making me wear a homemade costume while all the other kids around me got to wear these cool store-bought out of the box costumes (much of a luxury in our household, especially since they cost so much money!). And here I was making my own son wear a homemade outfit. If that wasn't me getting a taste of my own medicine... ;-)

He finally got over it, however, and had a blast the rest of the night. 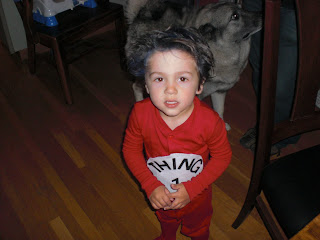 Onto our second party, the following day, where my work was hosting a Halloween Parade, a tradition they do every year for the employees' kids, and a tradition I personally love. :) It's so much fun watching all of the kids tromp around the building, gathering up candy from one bucket to the next and getting to see/meet your coworkers' families. I had an all day training that day, so I arranged to have Jon pick up the boys early from school, dress them and meet me at work so I wouldn't have to leave too early.

Unfortunately, Jon had another work issue to manage and couldn't get away early enough. What's worse, the boys' costumes were at home! So, I sped across the valley, back home, picked up the costumes, back to school, picked up the boys, dressed them and then made it back to work. The parade started at 3:30pm and I arrived at 4:15pm. Oh well. :) We were the very last of the troop - most families had already come and gone save for a few stragglers. But, it didn't seem to matter. Logan had an absolute BLAST collecting candy from one bucket to the next. Overjoyed at how easy it was to fill up his goodie bag in a matter of minutes. 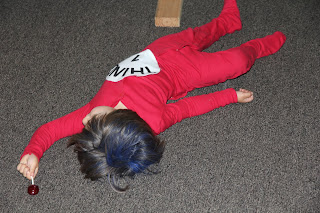 We hung out with a few of my coworkers before taking off to head home (Callum was dog tired and had fallen asleep in my arms). 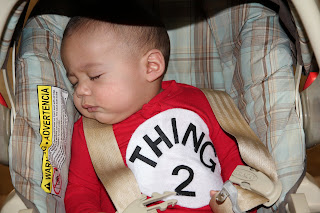 On the way home, Logan said to me, "Mom, I like your friends and I like your work. Can we see them again?" 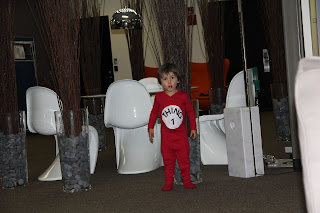 Halloween night we had a few visitors, Aunt Catherine, Uncle Danny, and their friends Nadia and Alan, along with my parents who also stopped by to see the boys in their costumes and give them a treat. Both kids seemed to be excited about all of the attention - Logan lasted a bit longer with me painting his hair blue, although still not long enough for you to see much of the blueness. Oh well. We tried! And now I know. ;-)

Catherine and Nadia joined me and the boys out to trick or treat the 'hood, while Jon and Danny (Alan and my parents had all headed home) stayed at the house to hand out candy. Logan finally caught on that he could get candy from each house he went up to, about half way through, but he was a pretty stubborn little guy when it came to saying "Trick or Treat" or "Happy Halloween" or anything like that. Still, we had a great time and it was fun to get out, see all the kids running from one house to another screaming with glee and enjoy our neighbors and neighborhood.

Hope everyone had a great Halloween! 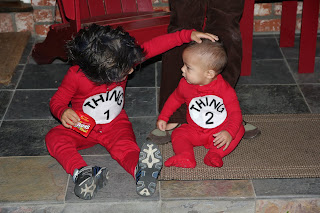 They are soooo cute!

thanks for including us! As always, awesome times to be had all around. Love those Things!