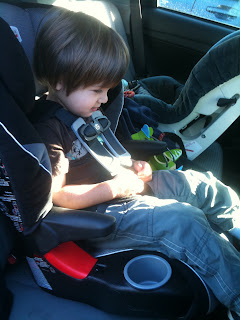 We have been borrowing the Snap n' Go stroller frame

from the Jodoins for Callum these last few months, but because Jarrod's sister, Marissa, just had her baby (Nolan - a cutie pie!), it's time to pass it on. This is also where most of Callum's clothes (and Robert/Logan/Connor's!) will be going too. :)

So, we researched which new booster seat to buy for Logan, so that Callum could move up into the convertible car seat that Logan's been using for the past two years. They arrived last night and Jon and Logan were so excited about their new "toys" that they installed them right away.

(although he wasn't into me taking a picture of him in it this morning). Bonus? Sippy cup holders on both sides!
Posted by Mama Bree at 9:20 AM