Today was Logan's first day back to school (yes, it's mid-August!  No more long summers for these kids!), and now he's a big time First Grader!

As much as I can prepare ahead of time for an early morning start, it always rocks my world.  We actually weren't too bad today, even though Logan has been sleeping in most days this summer and I've been lazy, staying in my pj's for an hour or so after Jon leaves the house!  ;-)

I think what did it was the comical way Jon and I woke up - Jon hit snooze on his phone (our alarm) a couple of times and the last time he did,  he didn't actually get it to snooze.  What's more, the phone dropped and fell underneath our bed.  So, there we were, jumping out of bed, moving the bed away from the wall and crawling on the floor to try and reach the damn thing that was getting louder and louder as it continued to alarm.  Yep.  What a wake up call!  ;-)

Logan really wanted me to drop him off this morning and I was game anyway - I wanted to meet his new teachers, give them a few supplies I had bought this past weekend to start them off, and take some pics of his first day!

We were tired, but we were awake (and more importantly, on time!  hahahahaaa!!) 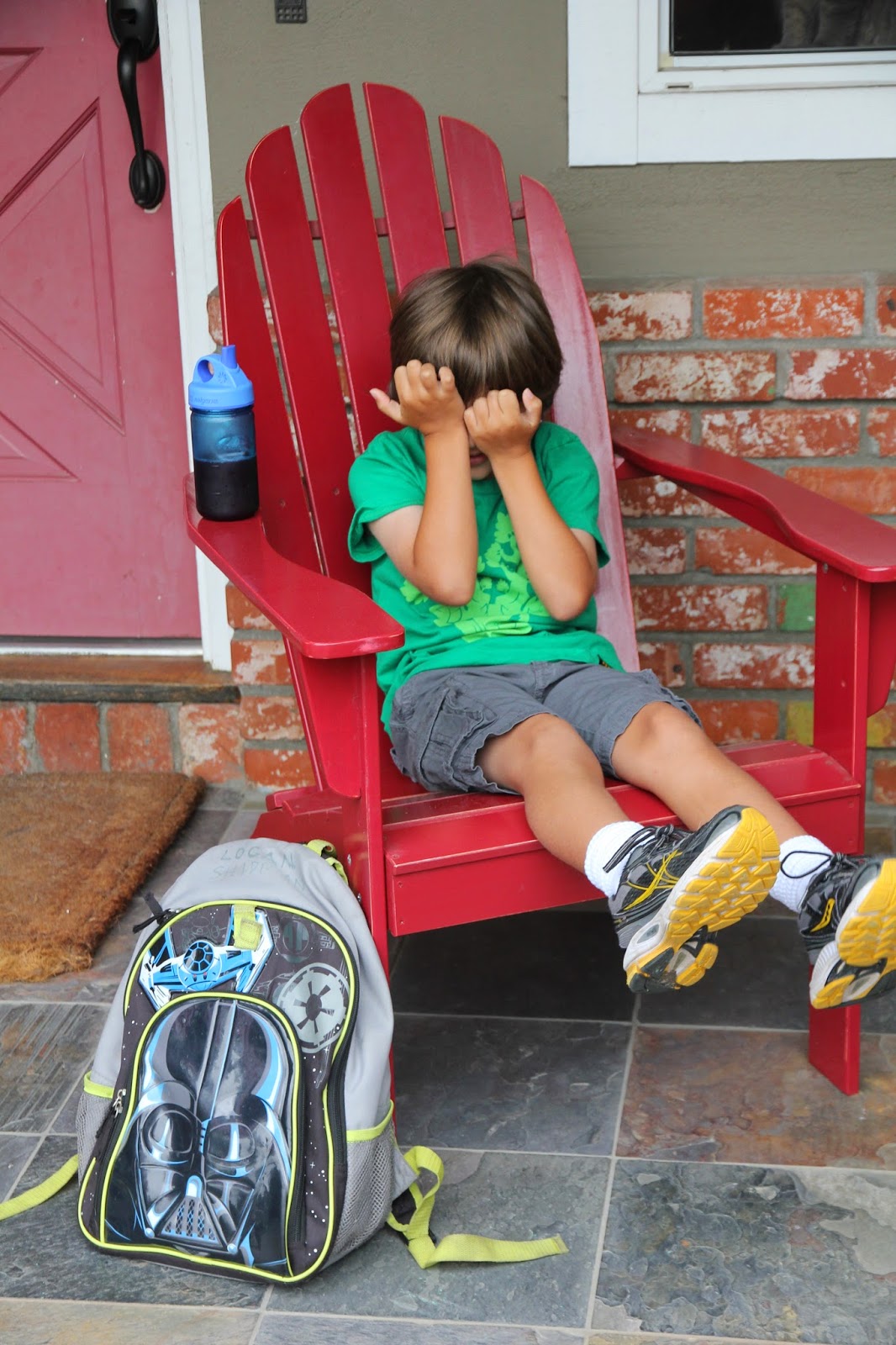 On the drive to school, Logan said "I wonder who my new teachers will be?!?"  He sounded excited, which I was glad to hear, since last Friday he sounded a little anxious as we talked about school starting up again (he was worried he wouldn't know any of the kids in his class and/or wouldn't remember his old friends - I reassured him that he'd remember his old friends and he'd make new ones in his new class too!). 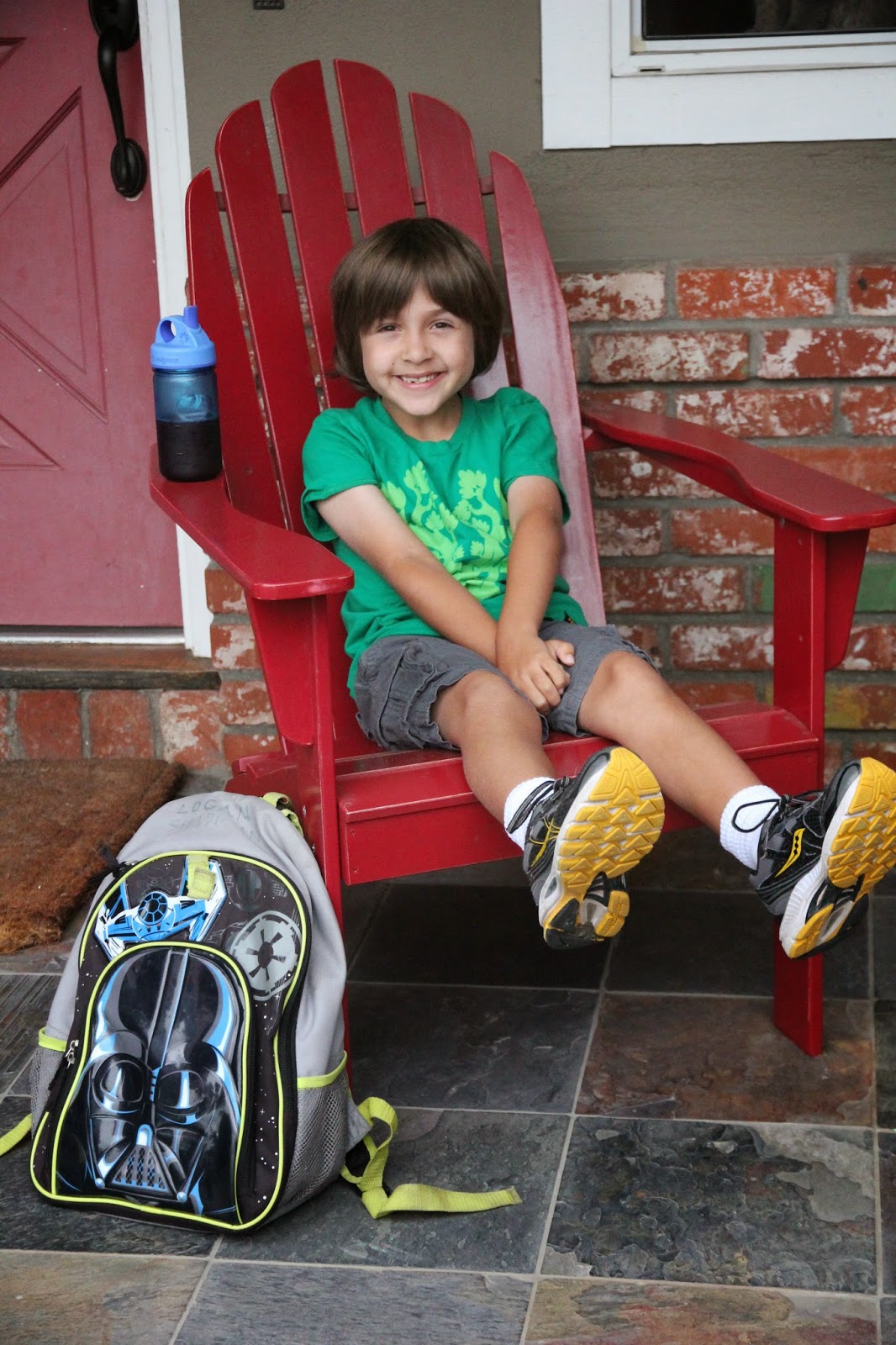 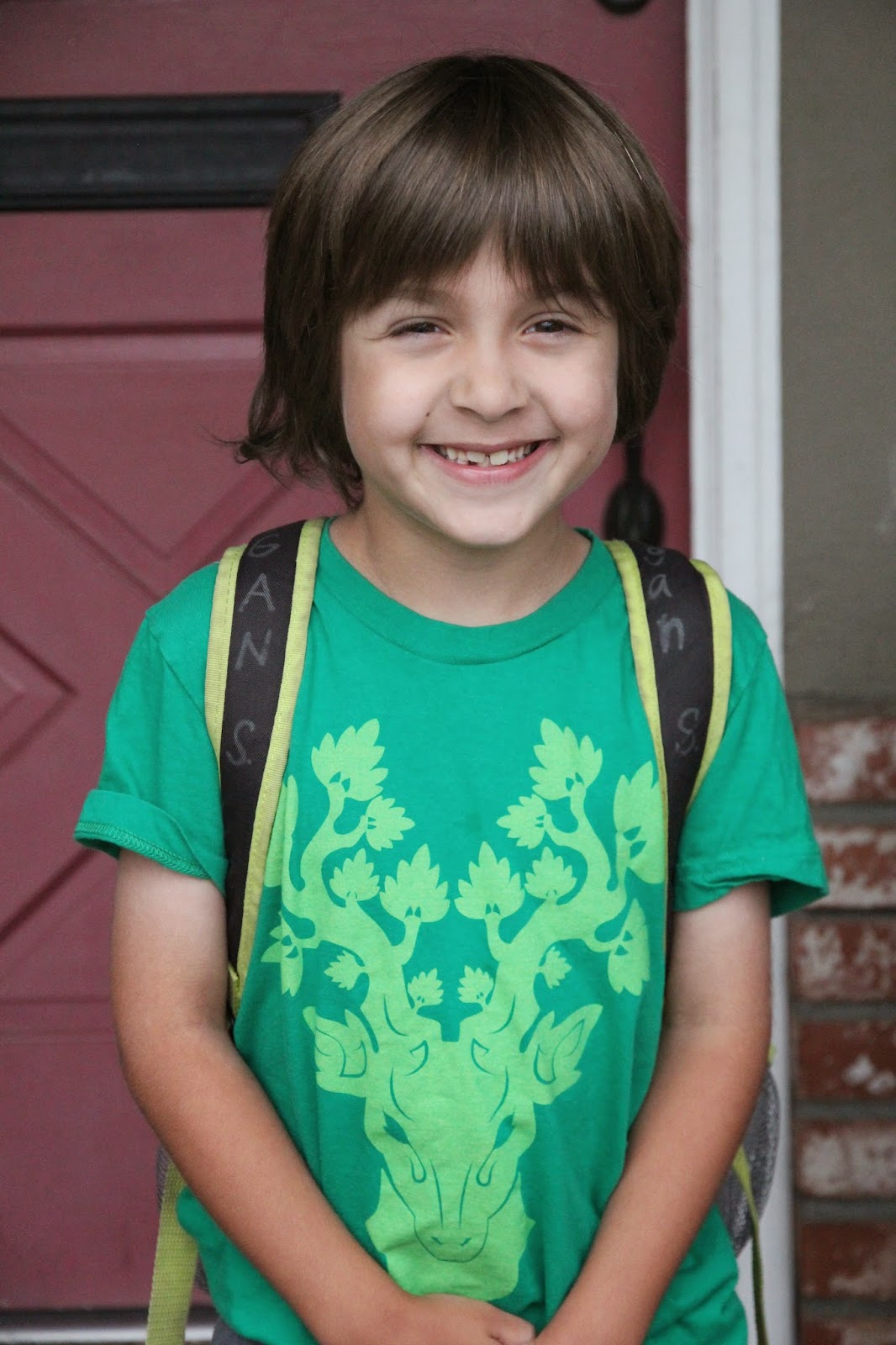 I told him I was taking pics to show he was off to his first day of school - so he decided to start walking (very fast) toward me.  He thought it was HILARIOUS.  ;-) 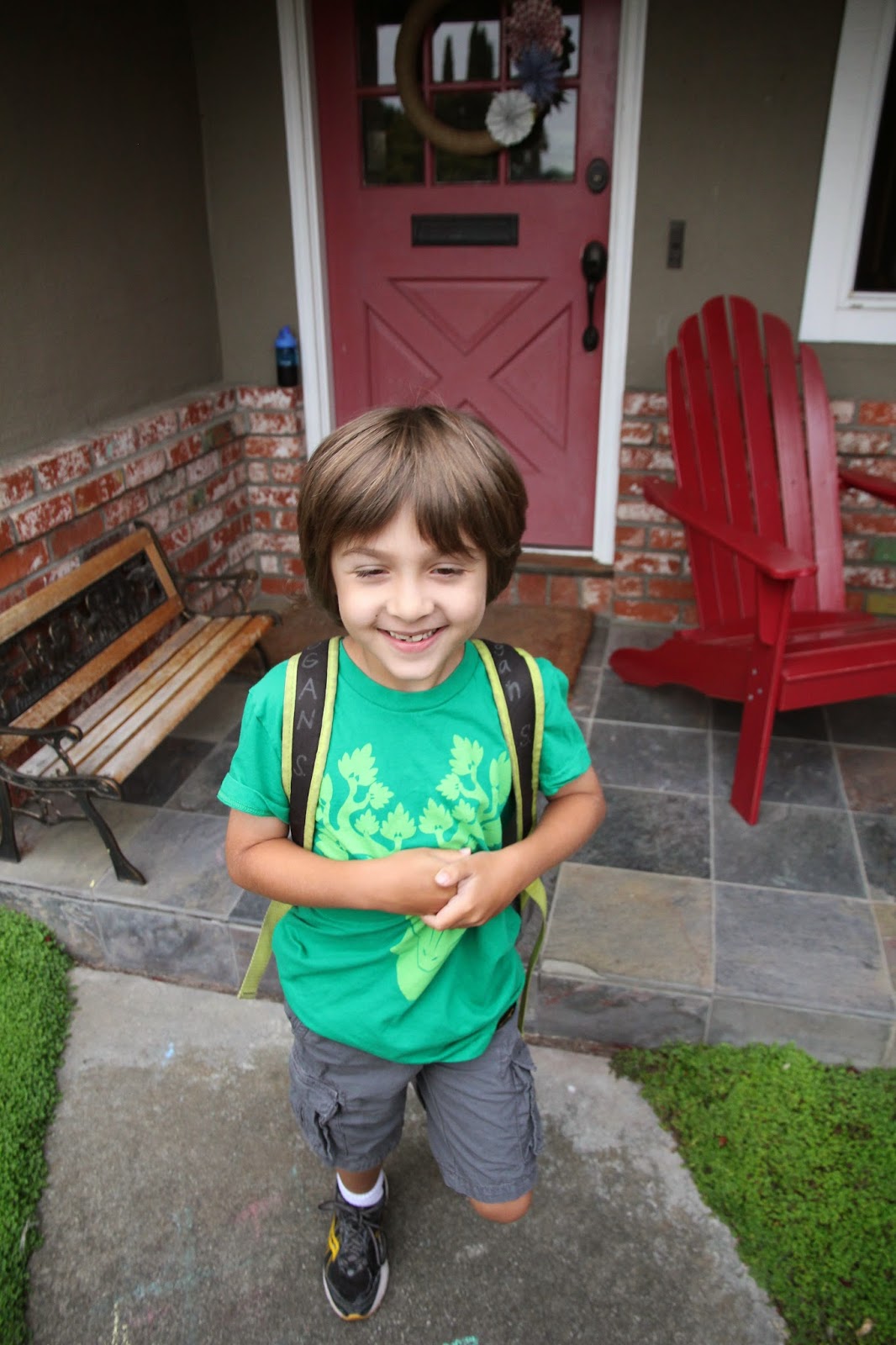 Logan and his best friend Aidan, who's in his class again this year (BIG YAY!), hanging out in their new classroom and welcoming other kids in. (Their teacher immediately gave them a job to start off with, since we were there earlier than others).  :) 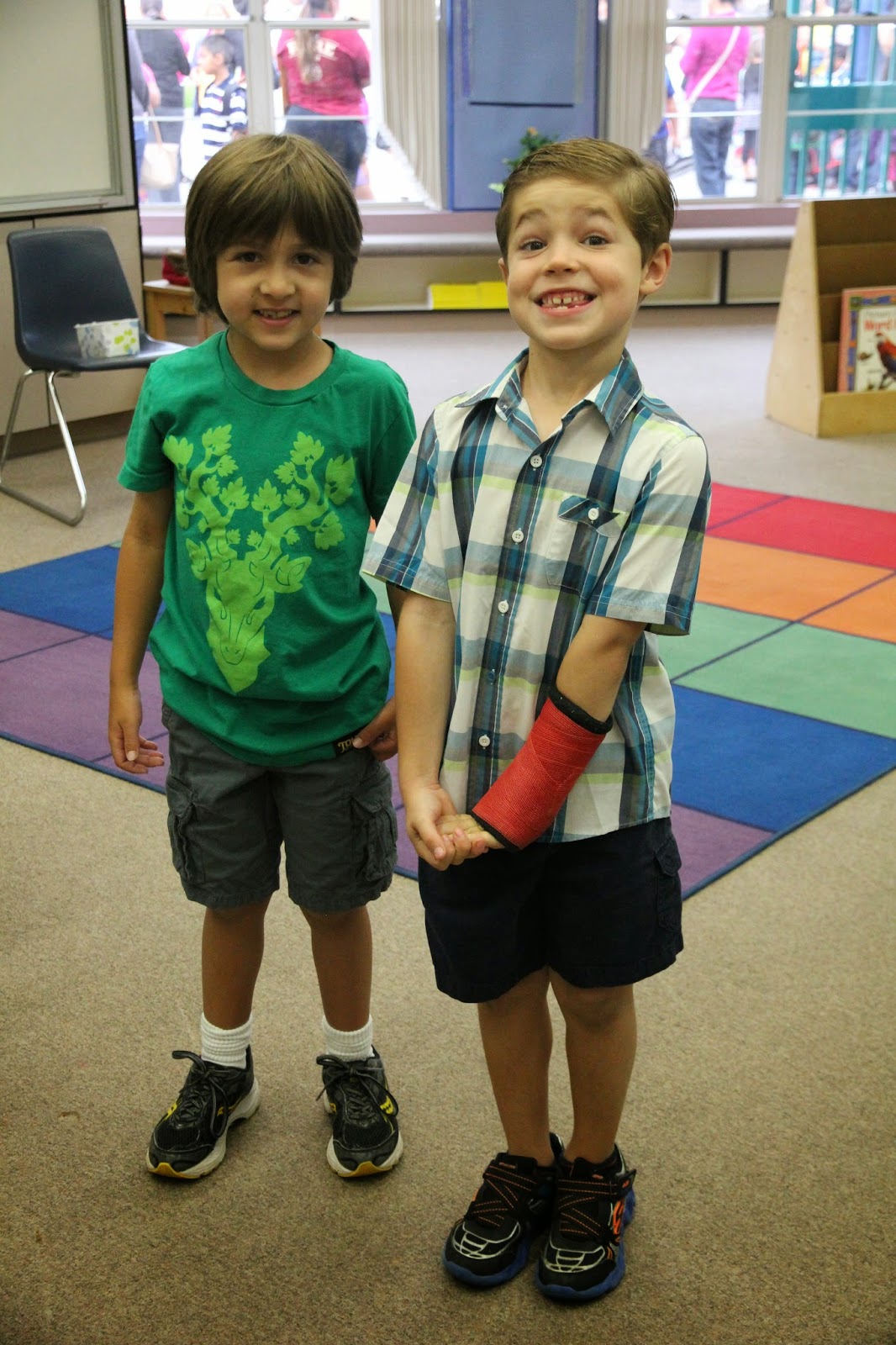 Once other kids started to arrive, their teacher had them sit down and start talking to each other (introducing themselves and getting to know one another).  Logan barely waved goodbye when I left - he was definitely back in his comfort zone and happy to see his friends again!  I'd say a good start to a great year - Woohoo!  :)