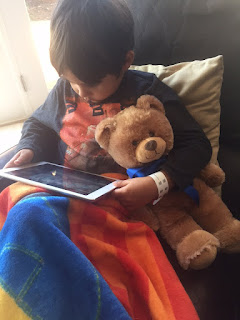 Most days at the clinic go great, but some days are rough. Today was one of the rougher days. All we needed to do was draw labs to see what his counts are at, so that we can bump his home chemo up to 75% (whenever he stops chemo due to neutropenia, we have to slowly transition him back onto his full dose - the last two weeks he's been at 50% but we want him back to 100% as soon as possible).

Anyway, accessing his port today was the pits. The nurse seemed right on and all was going smoothly, until a split second later and it wasn't. She wasn't getting a proper blood return after she accessed his port, so she pushed some saline in (which they do sometimes to get the blood flowing back out), and when she did that Callum started screaming. She was also pushing and feeling his port so I could tell she didn't like the look of it.

I'm still not exactly sure what happened but I don't think she ever got it in correctly - I suspect she missed his port completely, but I don't know for sure. All I do know is suddenly my poor kiddo was shrieking and I was quietly but firmly directing the nurse to pull the needle out and try again rather than to keep pushing and prodding and feeling around, while pulling him onto my lap to try and calm him down. And then the poor nurse tried to sweet talk my son with the slow ritual of explaining every step while accessing, and so I quietly but firmly again had to say just get the fucking thing done already. *sigh*

It took awhile to get him to stop heaving and just breathe normally. He had his face buried in my chest and I just knew he was saving this traumatizing event in a memory bank somewhere to remind me later about the awful time the nurse couldn't find his port. :(

THANKFULLY, they happened to have these super soft teddy bears to give to kiddos traipsing through the lab, so one of the lab techs said how about a teddy bear? Between that and some Mixel stickers the poor nurse found for him, he was able to quickly recover and actually started chatting with the two of them about his Mixel collection (as if the shrieking trauma we just experienced never actually happened). :)

He fell asleep on the ride home and has been cuddling on the couch with his new teddy bear (now named Spongy) all afternoon.

The good news after all of that, is that his numbers look fantastic. So, we're bumping him up to 75% of his dosage, starting tonight.
Posted by Mama Bree at 8:33 PM