The beginning of orthodontics 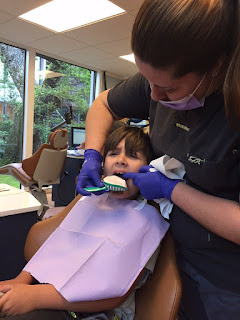 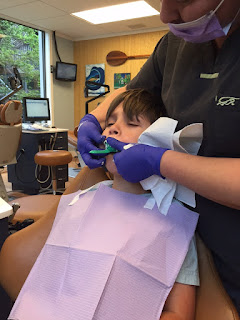 Our poor kids are likely going to be living at the orthodontist thru their pre-teen and teen years. I had pretty bad teeth as a kid, so started braces early on. Jon had work done later as an adult. So, I've always assumed we'd need to do something, and brought Logan in last year to begin observations.

A couple of his top front teeth have just recently grown in and are hitting behind his bottom teeth (vs the slight overlap you'd want to have). Because he's still too young to start anything serious, our orthodontist is going to start with a nighttime retainer to try and nudge those teeth out into place.

So, they took an impression this morning. I warned him it was an uncomfortable and awkward process but it would only take a minute to set and then he'd be done.

He struggled a little but overall did fantastic. Afterwards, he said to me,"That was the longest minute of my life!!" 😂😂
Posted by Mama Bree at 10:08 AM