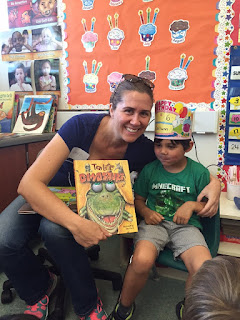 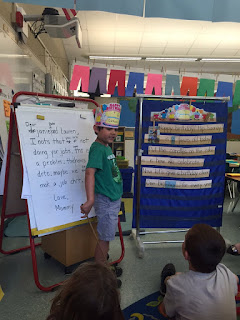 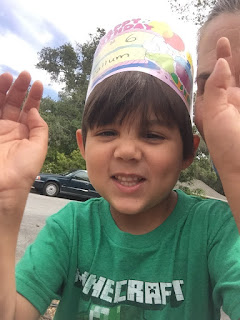 Our school doesn't like to make a HUGE deal about birthdays (which I'm thankful for), but they do allow parents to stop by for a visit and read the class a book (from home, of the birthday kid's choosing). Callum had a really hard time picking which book I should bring to read, so I brought a few of his favorites to have him pick when I arrived.

Having multiple home books in the classroom however, made him want me to read them all. And, he threw a mini tantrum about wanting me to read another book (when the limit is normally just one), instead of moving along with the day. His teacher and I were in a pickle and she finally said she'd make an exception and allow a second reading...which he LOVED.

Afterward, he used a pointer to guide the class to chant a birthday song which was pretty cute. His teacher had made a birthday crown for him which he wore all day long, and still had on when I picked him up from his bus ride home!

I tried getting a pic of us together, walking into the house, with his crown still on, but he wasn't having it. *sigh* Even when he's being a stinker, he sure is cute tho. :)
Posted by Mama Bree at 10:59 PM