The fevers came back 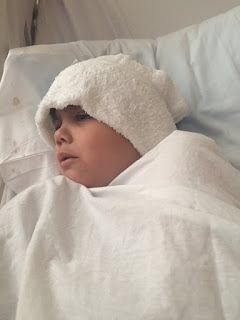 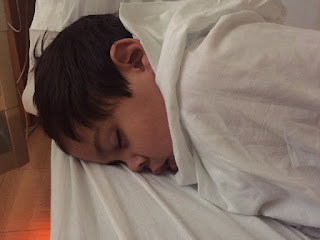 I just realized I haven't blogged in a number of days. But I guess I have a good excuse. Just when things were looking a little better after Easter Sunday, Callum developed a super nasty cough Monday evening which kept him (and I) up all night. His coughing fits were really rough - causing him to choke and gag because his body was coughing so violently. He was miserable, the poor guy.

The crappiness of this bug continued on Tuesday when the fevers returned, and with a vengeance! He spiked up to nearly 104, which had the nurses rushing around putting in orders for more Tylenol. We ran some more blood cultures (standard when fevers hit), got some cough syrup and Tylenol in him, and did a chest X-ray. The flu can lead to complications like bacterial infections in the lungs, and given the fevers had returned, we needed to be sure there wasn't a secondary infection at play. Luckily, his lungs were clear, so that seemed to be a bit of good news in all of the chaos.

I really wanted to make sure he slept better that night, given he had only had small pockets of 20 minutes here and there the night before, to rest. We decided to also try giving him an albuterol treatment before bedtime - not because they could hear any wheezing in his lungs but we figured why not. And if it could help him stop spasm'ing long enough to calm down and rest, then by all means we were going to try it!

So I'm not sure if it was the cough syrup (that I had finally convinced the Drs to allow), the cough drops that I was making him suck on, the fluids and Tylenol, or the albuterol (probably a combo if it all), but he was finally able to settle down enough that he slept a bit better that night. He was still waking up in coughing fits but they were coming on every couple of hours instead of every few minutes.

Because of how rough Tuesday was, we took it super lazy and quiet on Wednesday. His cough remained but was a lot better. And he started to get a bit of his appetite back.

Yesterday and now today, have been even better still. He woke me up this morning because he had hopped out of bed, trying to move his pole with him to get to the window so he could see if the sun was up yet (it wasn't). He's been up and moving around a bunch more today which pleases everyone to see. Hopefully, the worst is now behind us!
Posted by Mama Bree at 2:35 PM