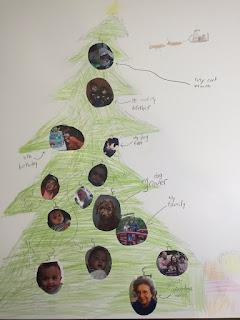 Logan and I were up until 10pm last night, finishing up his "All about me" project. And really, it still wasn't complete. But I couldn't allow him to stay up any later (not that he wanted to anyway!).....thus begins the late long nights of homework I guess?

His assignment (which was given to him last week) was to write a report about himself. In addition, he could bring a couple of things that were "special" to him from home, to share, as well as his favorite book, and a poster of himself (decorated by his choosing, with pictures or drawings or whatever he wanted to do).

In his report, there's a section where the teacher asks him to share a funny story about, or that has happened to, himself. We sat for a couple of nights scratching our heads tying to figure out what would be funny to share, because while his younger brother happens to be a real character and class clown, Mr. Logan is the shy, sensitive, brooding kid with just a few friends who pretty much keeps to himself about everything. And anything Jon or I would remember was deemed *not* funny or shareable (usually because it was too embarrassing) to his class.

As a sort of last ditch effort, I sat him down in front of my laptop the other night and did a quick query on my blog for all "Loganisms" I ever posted. And then we sat and read them all. Some were sappy but most were hilarious - particularly to a 3rd grader when reading something he said as a 3 year old. :) He decided to share a few of those and picked out his most favorite.

Then he got stuck again when it was time to make the poster. His teacher had told me on the side not to stress about it because it was totally optional but I didn't let my kid know that. I told her he needed to learn how to manage his time and get this shit done, because it isn't like this is going to get any easier as he gets older! So, given the holidays, and the fact that he likes to draw but wanted to share some pictures, I suggested he draw a Christmas tree with his pictures glued to it. After a lot of whining and a few scraped drafts that he scribbled together, he finally drew a decent tree, ready for some ornaments.

Then the daunting task of sitting in front of my computer, yet again, going through 9 years of pictures I had taken of him. :) Interestingly, he loved most of his baby pictures, so he picked out several of those to share and then threw in a few of his family, when he found one he liked and/or it printed well (he chose several family members but a lot of my photos printed too dark for us to see!). He also wanted to highlight a lot of the animals which I thought was cute, whereas Callum, Jon and I were a little bit of an afterthought! LOL

So, as the clock struck 10pm, I finally said we needed to call it quits. But, he was so thrilled to have finished in time and, I'm sure, will do great during his presentation today. :)
Posted by Mama Bree at 2:59 PM