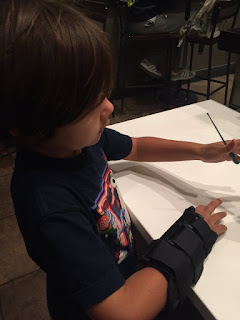 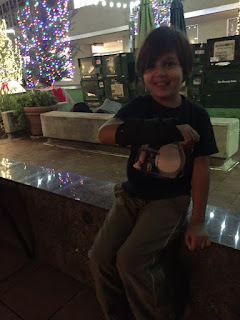 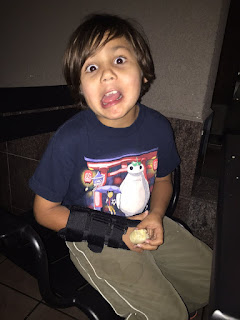 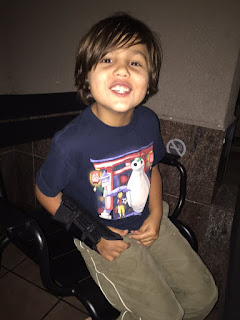 So, Callum had another set of xrays yesterday. They liked how much new bone growth is already showing, so they decided to put him in a removable splint (vs another cast).

At first, when they took his cast off, Callum was pretty guarded about letting anyone touch his arm or move it. The dr's explained to me that it's a very normal reaction, since his wrist and elbow are likely stiff and will be sore if he tries moving it too much.

Then the itching started. His poor skin was finally breathing air again and that just enacted something in Callum which made him begun itching his skin furiously. Before we could stop him, in about 15 seconds, he had itched his arm so much that he was starting to create a decent abrasion on his skin. :( Then the cast tech guy said oh, here you just need to clean it and the itching will go away - so he grabbed a handful of hand sanitizer and started rubbing it all over Callum's arm. Except I guess he didn't realize Callum skin was already pretty raw? So then the poor kid was screaming because HELLO abrasions and hand sanitizers do NOT mix. :(

So the whole "yay! No more cast!" celebration really turned into a very overwhelming and upsetting appointment for poor Callum and he started crying that he just wanted to go home.

Now, the Dr needed to fit him for the removable splint but he was NOT wanting any part of that, so I finally said ok kiddo - we either need to go home with this splint, or they're going to put another cast on you, because we still need to protect your wrist for a few weeks.

However, instead of relaxing and caving into the idea of the splint he looked up at me and said ok! Let's get another cast then.

Meanwhile the Dr is shaking her head no at me and saying I really don't want him in another cast. *sigh*

I had her leave the room for a bit, washed his arm with soap and water to try and calm the itching and stinging, and just get him to relax. He cried for some time and was still pretty upset when she came back in, but was settled down enough that we fit him into a splint quickly and then I laid him down to rest. Phew!!

After the appointment, we headed over to Trader Joe's where I told him he could pick out any treats he wanted, which perked up his mood. And then after some shopping, we walked over to Starbucks to get a hot chocolate and some scones. As you can see, all memory of an itchy painful arm had finally passed, and he was back to his regular ol' goofy self. :)
Posted by Mama Bree at 2:44 PM