All I want for Christmas is my two front teeth.... 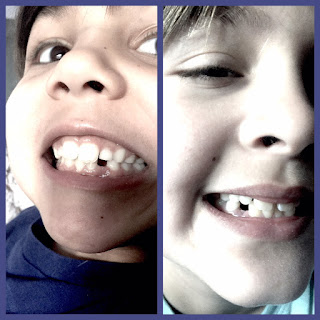 Logan woke up Christmas morning, yawned (or something), and suddenly found his tongue had pushed out one of his front loose teeth. :)

Then, later that evening, as we were talking about the tooth fairy making a visit (and how cool was it that it was also on Christmas!), I noticed Callum twisting and wiggling an already loose tooth of his own.... I turned around a few seconds later and he was holding out a tooth in his hand! We laughed that he decided to pull out his tooth to be like his brother, when he normally doesn't want us to even touch them. Competitive much?! ;-)

At bedtime, the boys then daydreamed about what exactly the tooth fairy might leave. Callum was hoping the tooth fairy would leave one of his favorite toys that he didn't end up getting from Santa. I told him I didn't think the tooth fairy would leave toys, like Santa does, but he could use the money left behind to buy something he'd like. So then Logan chimed in, saying maybe they'd get extra money since it was Christmas. I said that might be possible - especially since they also both lost a tooth on the same day!

The boys were very pleased, the next morning, to find an enormous $5 (Wow! That tooth fairy must've been feeling pretty generous!) left behind. We visited the toy store later that morning, since they wanted to spend it on something special and had saved up some of their recent allowance and cash gifts from birthdays and such. They were pretty darn pleased with themselves. :)
Posted by Mama Bree at 3:49 PM