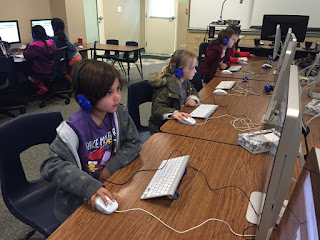 I also volunteered on Thursday morning, in Callum's "Hour of Code" class, since I was curious what they were learning in their computer class.

I guess it was a good thing I showed up! The computer lab teacher was absent, and apparently they don't have subs for the computer lab, so the classroom teacher is just left to fend on her own. Since I was there to help her out, we could sorta cover everyone together (since they all had a million questions on how to log in or what app to select to begin their coding lessons etc) :)

Callum was a pro!! I was amazed at how quickly he picked it up (they had some pre-lessons in class last week and then watched a video on their computer, but otherwise were entering in very simple "forward/left/right" code commands on their own). As they progressed from one level to the next, it would become more challenging of course. And it was all set up in an "Angry Birds Game" sort of environment to make it more fun and relatable to the kids. I was running around helping several others get their heads around the concepts but every time I'd peek over at Callum, he was just humming along on his own, or helping his classmate pass a level next to him. :)