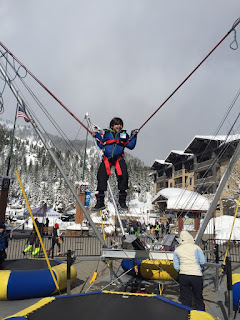 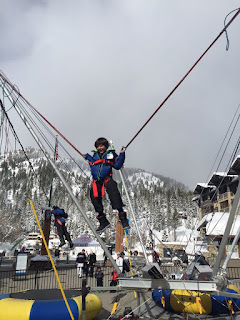 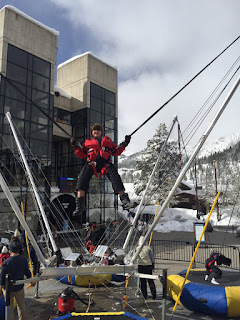 We took it easy this morning then decided to see what the Squaw village was like for an afternoon outing (and lunch).

But, on the drive to Squaw, the signs said all parking was full. We were all pretty hungry for lunch so we kept on toward Tahoe City and stopped for a yummy lunch there instead. After lunch we headed back to Squaw, hoping the early morning skiers were done. Signs still said the parking was full but we decided to drive around anyway and luckily found some parking spots!

First stop as we entered the village....bungee jumping for the kids! We figured since they had been in the car for a couple of hours (total drive time), that they could use this opportunity to burn some pent up energy!

Logan decided he was done a bit early - I guess the straps were rubbing his legs/butt which were starting to hurt. Callum, however, had an absolute blast (and wanted to do it again and again). :)
Posted by Mama Bree at 6:22 PM