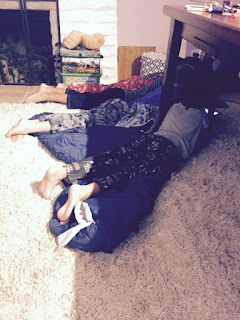 The boys had migrated to the game room sometime after dinner and have been playing a combo of board games and iPad games (as seen here hiding under the table) all night!

It's 10:45pm and I've finally got all boys laying down in the dark in their sleeping bags. But, I can hear them talking excitedly clear across the house! LOL They are in for a rude awakening come morning time 😁

(As an aside, I'm so relieved that the big boys decided to let Callum join them for the camp out on the floor. I debated back and forth about this before they came over, because I knew he'd want to stay with them but guessed the older kids would want their space - and did want to respect Logan's desire to have some alone time with his buddies only..... So as it became later in the evening, they had basically told Callum they didn't want him playing/sleeping with them, and it totally broke his heart and feelings. I tried to sugar coat it by saying it meant he could have special time with me and Daddy if he wanted but he just wanted to hang with the big kids. So, every few minutes, he'd poke his head around to watch them play, because he couldn't stay away. :) He finally asked again about joining them for the night and they agreed to allow him to stay. He's now cuddled up next to them and chatting away, happy as ever. Phew!!)
Posted by Mama Bree at 10:49 PM